By BelieverRian (self media writer) | 3 months ago 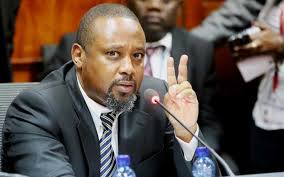 A defendant in the Ksh180 million Youth Enterprise Development Fund (YEDF) case has been sentenced to 27 years in prison by a Kenyan court.

If he did not pay, he was given the alternative of paying Ksh720 million or doing 27 years in prison for the crime.

Two multi-million shilling contracts were given via single sourcing, which is against public procurement laws, according to a PIC investigation.

The disputed payment was made, according to Ngamau, who acknowledged it to the Parliamentary Investments Committee (PIC).

In seven days, Quorandam Limited was scheduled to provide Ksh65.9 million in consulting services for an ICT strategy design.

A contract that came second, at Ksh114.9 million, called for Ngamau's firm to advise the agency on software needs for operations management.

Ngamau told the PIC that he paid Ksh115 million to an American national named Donnie Collins Reeves for some of the job after receiving the second contract.

Members of Parliament went online to dig for information on the alleged Mr Collins and were astonished to find a 61-year-old American obituary.

Despite the fact that the Quodrandum MD had never seen or met the American national, he sent him (Collins) the massive sum through his Chase Bank account.

How to start a taxi business with one car

Ways To Know She is Shying Away From commitment

How To Make Ugali For Dinner