By Mzalendo (self media writer) | 4 months ago 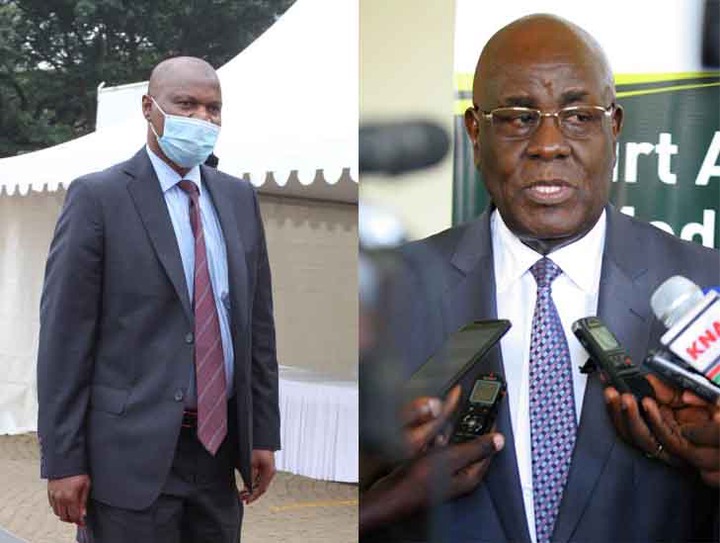 The Director of Criminal Investigations (DCI) George Kinoti has alleged that detectives recovered Sh5.7 million from a woman who they claim was to deliver the cash to judges.

In a replying affidavit sworn by Chief Inspector Felix Karisa to a suit filed by the judges’ association, the DCI claimed detectives raided Justices Aggrey Muchelule and Said Chitembwe’s chambers after a tip-off that they were about to receive Sh7 million bribe. “From the onset, we want to put the record straight that the judges were not arrested or harassed as they claim, but they willingly agreed to accompany us to the DCI headquarters to record their statements over the bribery claims,” swore Karisa.

Karisa said he had been tasked to investigate complaints on some judges and judicial officers accused of graft and had received credible information that some people acting as brokers had approached the judges to procure favourable decisions in some matters.

He swore that on July 21 he received information from a complainant that a series of meetings between a certain judge and broker had taken place and they agreed on a Sh7 million bribe to be delivered to the judge’s residence.

However, Karisa swore that the meeting venue was abruptly changed to Milimani High Court, where the broker was to deliver the money. He stated that on July 22, they laid a trap at Milimani High Court and waited until around 2pm when they received information that the meeting with the broker was to take place at Justice Muchelule’s chamber while being facilitated by Justice Chitembwe. “We proceeded to the two judges chambers and introduced ourselves after which we conducted a search on the occupants, which resulted to the seizure of USD50,000 (Sh5 million) from a woman who was present at Justice Muchelule’s chamber,” swore Karisa.

According to the investigator, they recovered another USD7,000 (Sh700,000) from Justice Chitembwe. He accused the Kenya Magistrates and Judges Association (KMJA) of misleading the court to stop DCI from arresting or charging the two judges.

“The DCI was only undertaking lawful investigations into grave allegations related to corruption and cannot be interpreted to mean an encroachment on the independence of the Judiciary. The petition to shield the judges is an attempt to stifle and frustrate our work,” swore Karisa. On claims that the DCI did not obtain a search warrant to raid the judges’ chambers, the investigator stated that it was impractical to obtain the search warrants from a court since they had a short notice from the time they got information that the bribery was going to take place. The two judges were summoned last week but Justice Muchelule and KMJA filed a petition and obtained orders stopping the DCI from summoning, arresting or prosecuting them over the bribery allegations.

KMJA, through lawyer Danstan Omari, argued that the DCI officers illegally stormed Muchelule and Chitembwe’s chambers without any search warrants and did not recover any bribe money as alleged.

Muchelule swore that the search by DCI officers did not yield anything after which the officers arrested and him took him to DCI headquarters and interrogated him.

When the matter came up before Justice James Makau, he extended the orders stopping the judges’ arrests and directed the other parties to file responses before October 18.

Content created and supplied by: Mzalendo (via Opera News )