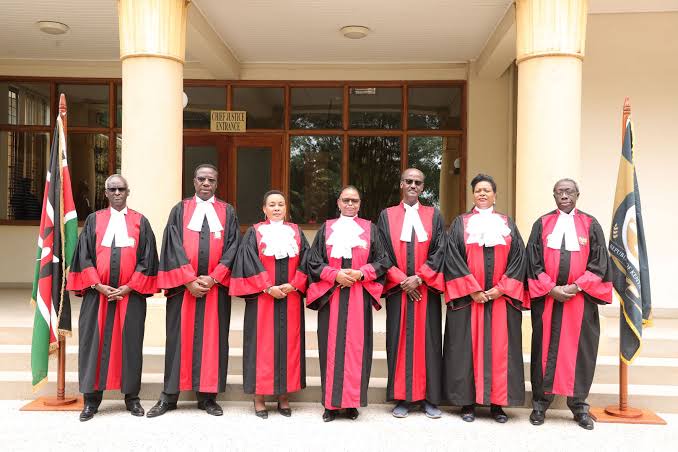 The Supreme Court of Kenya was accused of being unnecessarily harsh and negative toward the petitioners in their summarised ruling on the presidential petition on September 5. This is after it used the words red herring, hot air and a wild goose chase in the judgment.

However, in the detailed judgment, the honourable judges appear to be unbowed. They have not only repeated the so-called harsh words but also emphasized them and refined them in their respective contexts.

The judges noted that a huge chunk of the evidence provided by the petitioners and the interested parties (the four dissenting commissioners) was not worth their attention.

They termed the affidavits of Celestine Opiyo and Arnold Oginga as unacceptable and wanting in value.

"The staging of results was most wanting in value and did not point to the staging of the forms 34A... The purported evidence was not only inadmissible but also unacceptable," the judges wrote.

They added that the affidavit sworn by Justus Nyang'aya, one of the Independent Electoral and Boundaries Commission, IEBC commissioners was unhelpful to the petitioners and therefore a waste of time on their side.

They also had brutal words for John Githongo, noting that his evidence was unacceptable, utterly fabricated and a "sad issue" with numerous cases of dishonesty.

In the Jose Camargo case, the judges termed the submission by lawyer Julie Soweto as "another sensational claim" that yielded nothing of value.

"The form 34A that was sensationally presented...turned out to be nothing more than hot air and we were taken on a wild goose chase that yielded nothing of probative value," the judges noted.

They also described the matter brought before it that the suspension of voting in Kakamega and Mombasa resulted in low voter turnout as "another red herring" worthy of rejection.

On the other hand, the judges described IEBC's submissions as overly credible and reasonably at per.