Marijuana Should Be Legalized In Kenya- Rastafarian Community Makes a Statement

By yabez (self meida writer) | 1 months 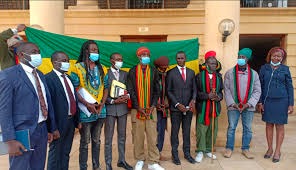 Member of Rastafarian community seeking to have Bhang legalized. The pictures are taken at Milimani Law Court PHOTO: DENNIS ONSONGO

Should marijuana be legalized in Kenya? The criminalization of marijuana comes due to the harm it imposes on young people. However, Rastafarians in Kenya have sought to legalize the consumption of bhang. The Rastafarians society of Kenya has stood before the Milimani judges arguing that the criminalization of the herb is unlawful and unconstitutional. They expressed that they should be allowed to smoke the herb, allowing them to connect to their maker. According to their chairperson Ras Lojiron, Cannabis can be referred to as kindukulu, ndom, vela, gode, marijuana, holy herb, kushungpeng, tire and bangi.Marijuana

He expressed his sadness as police keep harassing and intimidating members who grow cannabis privately. He continued and stated that the Rastafarian faith is enacted in the new constitution 2010 and acknowledges diversity.

According to the plaintiff. section 3(2) (a) of the Narcotic Drugs and Psychotropic Substances Control Act should be removed. According to the National Authority for the Campaign Against Alcohol and Drug Abuse (NACADA) the drug was named one of the most dangerous drugs here in Kenya.

Most Rastafarians are now joining the movement to push for its legalization. The motion was drafted in Parliament by the Late Okoth Obado who died of cancer. Countries like Zimbabwe, Lesotho, and South Africa are lenient to the rules on Marijuana usage. Do you think Marijuana should be legalized here in Kenya? Let us know below.

Content created and supplied by: yabez (via Opera News )