Mr Simon Siro Osiko, the man who was captured being whipped severely by a Chinese national in Nairobi has not received his Ksh.3.07 million compensation he was awarded by the court. Mr Osiko was given the court order after being punished by his Chinese employer for coming to work late. The whole scenario was recorded in an amateur video by Victor Kagai who was his work mate at that time. Mr Kagai told Nation that he chose to risk his job and save his friend since other Kenyans were silent of what was going on.

The issue reached the law and Mr Osiko walked out of the Employment and Labour Relationship counting himself lucky saying that his tormenters have been punished and he was going to receive compensation.

The judgement was delivered by justice Mathews Nderitu who ordered the managers of Chinese restaurant Chez Wou and Chinese national identified as Degh Hailan to pay him the money in damages for the compensation of his rights.

Surprisingly, Mr Osiko doesn't have the cash but he has the court papers showing he needs to be compensated. Mr Oseko told Nation that the government made a very huge blunder after allowing Mr Degh Hailan to leave the country before the case could be concluded. 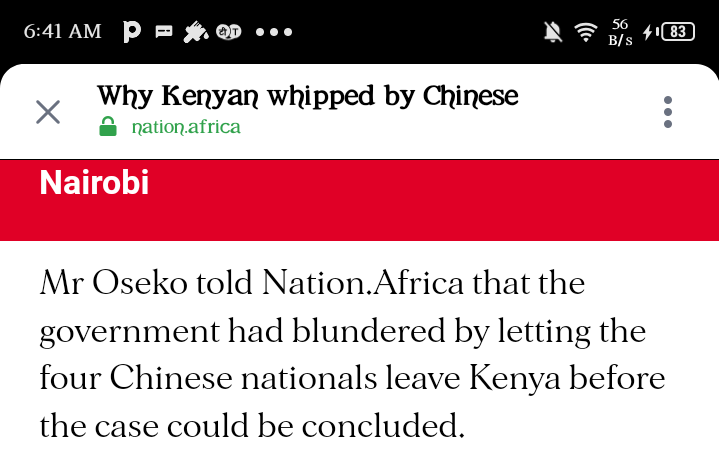 For now, his efforts looks like they have hit the wall since they tried to reach Chinese embassy through his lawyer but they have not received any response. The restaurant is still open but with a different name.