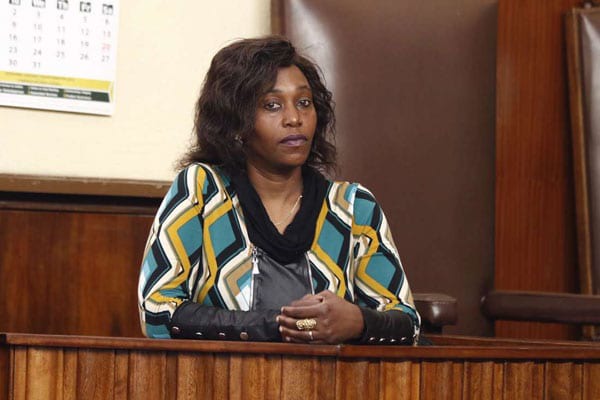 Ex-Icaciro Girls' School head and wife to the fallen Kiru Boys' school principal has been slapped with three decades in jail, for murdering her husband.

Ms. Jane Muthoni together with Mr. Isack Ng'ang'a aka Gikuyu were found guilty of the late Solomon Mwangi. Until his murder in 2016, the deceased served as the school principal for Kiru Boys' secondary.

Delivering his judgement on Thursday (today), Justice Joel Ngugi described Ms. Muthoni as a woman full of revenge, for ordering and financing her husband Solomon's murder.

The State prosecutor Catherine Mwaniki and Mbuthi’s family lawyer, Mathenge Wokabi had on May urged the court to consider sentencing the duo to death.

The two were alleged to have undertaken Mr. Solomon's murder between November 11, 2016, at Karakuta Coffee Estate in Juja sub-county, Kiambu County.

Initially, Ms. Muthoni had accused a cartel of secondary school heads, of Solomon's murder. She told the court how her promotion to being a school head was unwelcome to some, who demanded bribery to undertake such.

However, a later confession by one of the hitmen Ms. Muthoni had hired came to place her at the centre of the murder. One of Ms. Muthoni's hitmen who confessed the entire plan has since been sentenced and already serving his seven years' jail term.

Handing the sentence to Mr. Joseph Njuguna in March 2017, Justice Ngugi accused him of doing nothing to stop Mr. Solomon's murder, although he was aware of everything.

Another suspect and alleged lover for Ms. Muthoni has since gone into hiding and is yet to be found over four years down the line.