Just In: Killer Cop To Be Represented In Court By Lawyer John Khaminwa

By TabbsMaggie (self meida writer) | 21 days

Veteran lawyer John Khaminwa has allegedly been hired by Law Society Of Kenya to represent killer cop Caroline Kagongo. The killer cop has been on the run for several days after killing two men. However according to details shared by Kenya Report News site, Constitutional and veteran lawyer Lawyer John Khaminwa has allegedly been contacted amid speculation that the Killer Cop might end shot the moment she's spotted. Kagongo has been accused of killing his former lover in Juja. She is also connected with the death of another man in Nakuru. Kagongo has not been arrested despite efforts by the intelligence agencies to look for her. 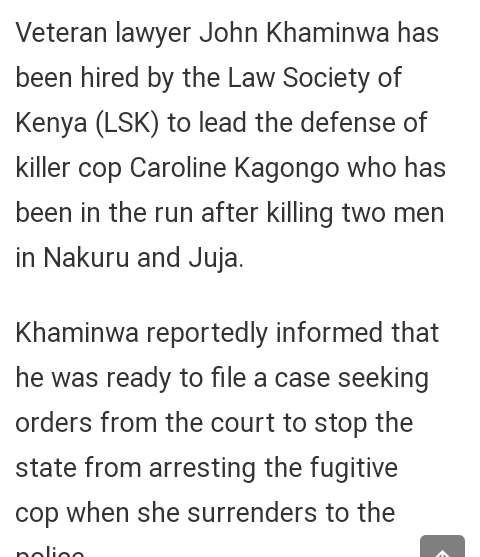 According to the details provided, the veteran lawyer is supposed to seek court intervention in preventing police from arresting fugitive cop Caroline Kagongo. The story of Kagongo has taken different twists and turns after reports emerged allegedly revealing that a lady had been shot for resembling Caroline. According to speculations, Kagongo might be on a revenge mission and is allegedly after his former lovers.

Reactions After A Form One Student Did The Following During Admission

Mama Rachel Ruto Breaks Silence, Calls Kenyans to do This