By TheReporterr (self media writer) | 15 days ago

A man has been presented in court over an incident that happened a year ago after he allegedly impregnated his two step daughters while their mother was on a business trip. According to the reports given by the prosecution, they revealed that the suspect who has been identified as Samuel Musila got together with the mother of the two girls aged 13 and 16 years respectively a few years ago after which they started staying together.

However, the woman who is an alleged business lady would be making different or rather several business related trips not knowing that the man was already making advances on her two daughters.

Grace not her real name would later find out that her children were pregnant for the same man after one of them allegedly failed to get her monthly menses.

"I'm a business woman and so, i would often make several business trips. However, i wash shocked after my daughter told me that she had missed her menses and that's when we bought a pregnancy skit only to find out that she was indeed pregnant. However, it's what she said later that shocked me, she got impregnated by my husband", she said.

As if this was not enough, the woman would find out that her other daughter was pregnant yet again, for the same man after which she decided to report him to the police station for more investigation and questioning.

However, after Being presented in court, the suspect pleaded not guilty to both crimes. The judge who has been presiding over the case ordered the prosecution to keep him in court for a while Untill a DNA test is conducted on the two babies due to the fact that the two children are yet give birth in a few months time. 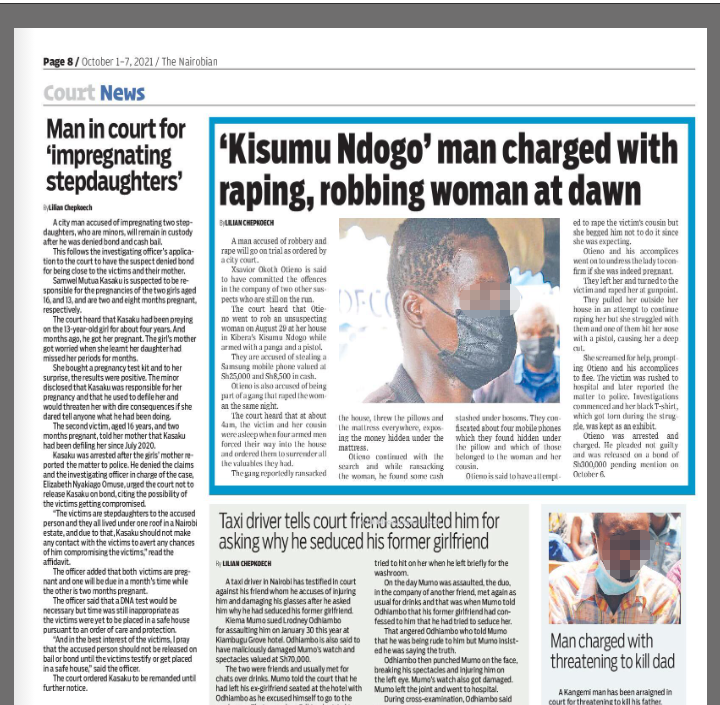 Student Kills Classmate Over A Piece Of Ugali