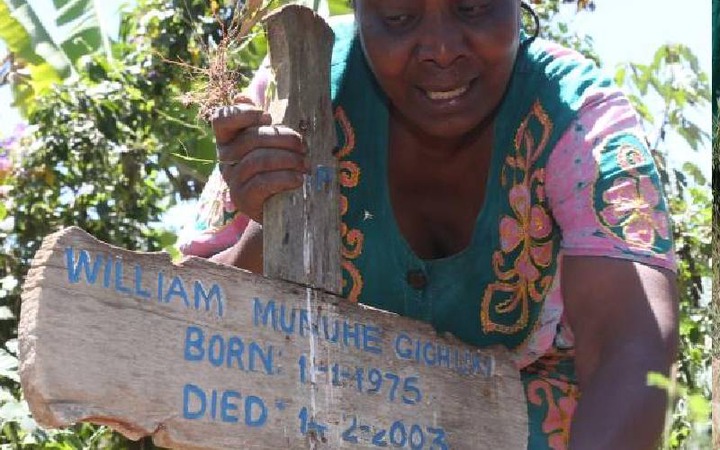 On January 14, 2003, freelance journalist William Munuhe was murdered. Munuhe met his death while attempting to lay a trap for Rwandan Genocide suspected mastermind Felicen Kabuge, a fugitive who was being madly wanted by the Federal Bureau of Investigations (FBI).

His corpse was recovered three days later covered with a blanket at his home in Karen, Nairobi. He had a bullet wound in his head and a burning jiko next to his bed.

Almost Nineteen years later, his family is still holding on to a February 13, 2003 statement from the American Embassy assuring them that justice will be served.

“We urge Kenyan authorities to pursue and apprehend Kabuga to investigate thoroughly the circumstances surrounding Munuhe’s death,” read the press release by the Embassy.

They were optimistic that justice would finally be served, especially following the statement which had offered them hope, that now seems to be fading out so fast.

For 16 years, the family had been following up the case with the Kenyan Government. Munuhe’s father Nicholas Gichuki passed in December 2018, aged 71.

When they got no help, Munuhe's elder brother Josephat Mureithi proceeded to the High Court in Nakuru in 2019 and sued the state accusing it of "killing" their case.

In his legal suit, Mureithi had sued the PS Ministry of Interior, Inspector General of Police, Directorate of Criminal Investigations, Director of Public Prosecution, Principal Civil Registrar Immigration and Legal advisors of government as defendants.

A slim ray of of hope shone on May 16, 2020, when Kabuga, 84, got arrested near Paris, France and taken to court for genocide and crimes against humanity.

In August, Justice Joel Ngugi advised Mureithi to seek help at Kituo cha Sheria to push their case to ICC. Ngugi noted that the High Court had limitations in handling the case.