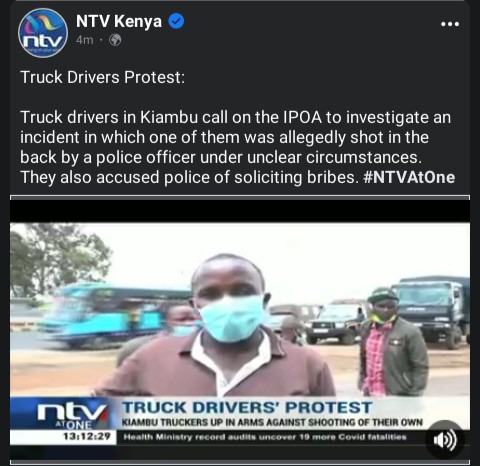 Today the third of April, NTV has reported news about truck drivers from kiambu who were completely outraged after one driver was allegedly shot in the back by a police officer. There were no clear circumstances under which the driver was shot.

Based on the report that was provided by other truck drivers, the man had not committed any crime and was actually on his duty doing his usual work. One of the drivers actually accused the police officer of being corrupt. "It was when the driver refused to give bribe that that the police shot him," this is what he said.

The other truck drivers were angered by this act saying that the shot man had a family to feed. They questioned by why the government was not providing them with enough security yet they were voted in.

The drivers seemed completely desperate saying that they did not know which route to be driving through because they were afraid of being shot.

Other officers who came to the protest said that further investigation was being done on the police who is said to have shot the man. The protesters want action to be taken on the police.

Content created and supplied by: Wanjirukev97 (via Opera News )

Strength of a Woman: Meet the Investigative Journalist Purity Mwambia That Kenyans are Talking About