By Waithe (self media writer) | 1 year ago 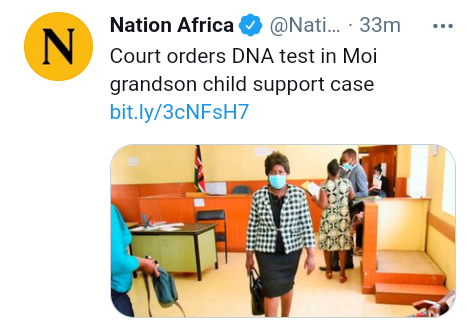 A court in Nakuru has ordered a DNA test to confirm the paternity of two children disputed by former President Daniel Moi’s grandson.

On Wednesday, Senior Resident Magistrate Benjamin Limo directed Mr Moi to present himself at the Lancet laboratories on Friday for his samples and those of the two children to be taken for analysis.

The order was in grant of the prayers sought by Mr Moi who had earlier made an application seeking to be allowed to confirm the paternity of the children.

He had requested the court to order the DNA test so that he can confirm whether he is the biological father of the children aged 11 and nine.

Mr Limo ordered Mr Moi to foot the bill for the test.

“… His samples will be extracted to be matched with those of the two minors. The results of the test should be filed before the court within seven days,” ruled Mr Limo.

In the case filed in March, Ms Tagi moved to court, accusing Mr Moi of neglecting his children.

Through lawyer David Mongeri, she claimed Mr Moi had refused to provide support for the children, leaving her to bear all the parental responsibilities.

While supporting her claim, Ms Tagi told the court that the younger Moi left her and the children in 2011 after four years of living together.

The court heard that the couple got the children while living together in Kenya and in Switzerland.

In her prayers, Ms tagi is seeking Sh1 million monthly to take care of the children’s needs including food, rent, education, entertainment and maintenance

Responding to the suit, Mr Moi, indicated his intentions to have the DNA test conducted to confirm the children’s paternity. He requested the court to stay the proceedings until the issue is resolved.

However, Ms Tagi said she was ready for the test, saying that she is certain that Mr Moi fathered the children.

Ms Tagi is a politician in Baringo County, who unsuccessfully contested for the Koibatek ward representative seat in the 2017 General Election on a Kanu ticket.