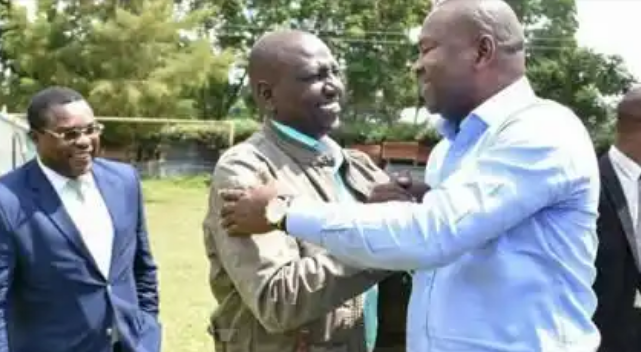 The former Sports Cabinet Secretary Rashid Echesa has found himself at crossroads over Ksh. 39 billion fake firearm deal after a receptionist based at the Deputy President William Ruto’s Harambee House Annex office and DP Ruto’s bodyguard revealed crucial information to the court of law regarding the matter in question.

Lawyer Wahome Thuku preceding on the case revealed that the receptionist identified as Askar Nyaboke Marigi working at DP Ruto’s Harambee House Annex office told the Nairobi court that the Echesa was a frequent guest at the Second in Command’s office and was in the company of two white men on the day of the firearm tender deal.

A car, however, explained to the court that she didn’t question the former CS if he had an appointment at the premise since he was a frequent guest at the deputy president’s office.

DP Ruto’s bodyguard Nicholas Maiyo also disclosed to the court that Echesa and the other two guests were carrying a small bag and phones which he seized, adding that he received three visitors on 15th Feb 2020 who he said used the VIP lift.

Reports indicated that Echesa said hi to him and requested to see the Deputy President who reportedly wasn’t in at that moment, this forced the former CS to wait for the Second in Command in the office.

The DP’s bodyguard further revealed that he did not confiscate Echesa’s phone because he was a frequent visitor at Deputy President William Ruto’s office.

The revelation of fresh details came at a time when Echesa and his co-accused are bogged down in a fake firearm deal for allegedly attempting to defraud Ksh 39B from Kazlowski Stanley Bruno after telling him that they will offer him a state firearm tender to supply to Military firearms.

Key Cases Won By Okiya Omtatah That Are of Public interest

Latest Education Updates To Candidates Who Applied For Courses Through Kuccps

Dear Students, You Are Reminded of This Information From HELB

Another Big Blow To MOE, Barely a Week After Opening Schools