By Onlinelegitnews.co.ke (self media writer) | 4 months ago 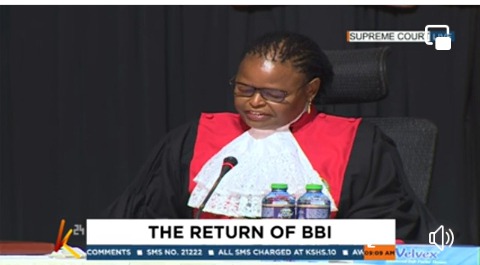 The Building Bridges Initiative Constitutional amendment bill appeal case kicked off yesterday at the Supreme Court for a three day hearing. The BBI opposers Lawyers are out to defend the outcome from the court of Appeal and the High Court who both ruled against the bill.

Many people are following the sessions as the two sides are trying to defend themselves for an outcome that will make them happy. Listening to Ruto's lawyers who are opposing the BBI constitutional amendment bill we realize that they might be making serious mistakes which might affect the outcome.

1.Telling The Chief Justice Martha Koome That She Can't Overturn The Results of The Two Top Courts That Ruled Against the Bill.

Senior Counsel Hon. Khaminwa during yesterday's listening told CJ Koome to consider the decision that was made by the two courts and overturning them will make kenyans lose faith in her.

This is a very big mistake that might influence the results either negatively or in a positive way. The lawyers should always consider facts and amicus curiae that is based on the constitution and using external ideologies to influence the decision is against the law.

2.Talking About President Hon. Uhuru Kenyatta trying To Influence Tho Outcome of The Appeal Case.

Hon. Nelson Havi said that Cj Koome must stop using president's immunity to make decisions urging her to be independent during the decision making process and ruling. Saying that the president is influencing the ruling isn't right as it creates much suspicion.

The judicial system is an independent organ and CJ Koome was appointed on merit and she clearly understands the constitution. Ruling will be based on the facts and the side that defends themselves well and after a voting process between the six supreme court judges.

BBI opposers have been all along saying that Koome should consider the interest of Kenyans despite the fact that the bill was approved by kenyans whose signatures were collected and verified by the IEBC.

The BBI opposers lawyers must learn that court decision is not based on the interest of many kenyans but by the rule of law as stated in the 2010 constitution.