By MsLK (self media writer) | 6 months ago 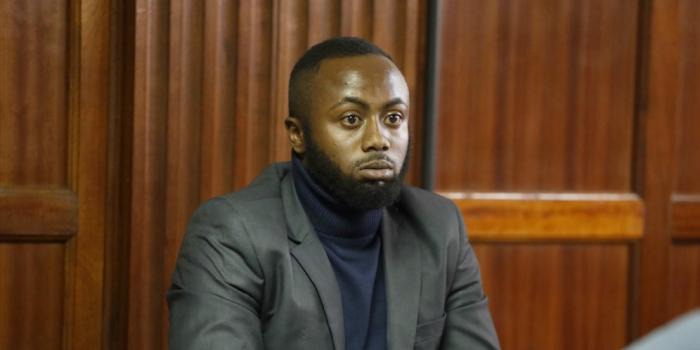 According to testimony given in court on Monday, Joseph Irungu alias Jowie was driven to the scene of a woman's death in 2018 by a young police officer assigned to the Recce Squad.

Soon after the murder was reported, detectives also found other pieces of evidence at the Recce Squad officer's home.

A pair of long blue jeans, a brown belt, a navy blue short-sleeved shirt, a cream-white pullover, a pair of brown open shoes, and a pair of black rubber shoes were among the things seized from Jennings Orlando's home.

Immediately following the September 2018 murder of entrepreneur Monica Kimani in Kilimani, Nairobi, Mr. Orlando was detained but freed after being charged.

Jowie also used a fake national identity card, appeared to be wearing a white kanzu, and arrived at Monica's house in a taxi after leaving a car belonging to his fiancée; Jacqueline Maribe with Orlando at a gas station on Mbagathi Way; according to Chief Inspector of Police Maxwel Otieno's testimony.

Recce officer Jennings Orlando is detained by the police due to his connections to Jowie. Mr. Orlando informed us that Mr. Irungu returned after 11 p.m. and appeared distressed. Irungu claimed to have a problem with the individual he went to visit; according to the investigator's testimony.

Jowie and Orlando first met at the Roadhouse Club near Royal Park Estate; where they remained until 8 o'clock that evening before Jowie left to go see a woman who had just arrived from South Sudan. Jowie was seen at the social club sporting a red cap, a t-shirt, and brown shorts, the court was told.

Despite being taken to the apartment by Orlando in Maribe's car, he eventually got out, boarded a cab and instructed Orlando to wait for him at a nearby gas station.

As he travelled, he took a gun out of the dashboard and raised it. He also removed a brownish coat and a white kanzu from a bag in the rear seat of the vehicle before getting out and hailing a taxi; according to Mr. Otieno.

On the evening when Orlando took Jowie to Monica Kimani's house, Monica Kimani was discovered dead in a bathtub with her throat slit. The police officer has not been charged but Jowie and Maribe have been accused of murder; they have pleaded not guilty and are currently free on bond.

The witness testified in court that Jowie introduced himself to the security guards at Monica's apartment complex; Lamuria Gardens Apartments, as Dominic Harun Bisera and had a national identity card with that name on it.

The identity card was eventually identified by police as belonging to a security guard employed by Lavington Security Company at the University of Nairobi. The hearing is currently ongoing.