By AbelOmasete (self meida writer) | 6 days

Kenyan based lawyer and political strategist Kipchumba karori while being interviewed on KTN news yesterday stated that Chief Justice Martha Koome, should wake up and act with speed following continuous attacks to the judiciary from the executive.

According to Kipchumba, the remarks made by President Uhuru Kenyatta on Madaraka day in Kisumu was very unfortunate, for the judiciary is an arm of government and it should be respected for it is independent. And to make matters worse, the decision by President Uhuru Kenyatta to only appoint 34 judges instead of the 40 whose names were forwarded to him, is unconstitutional for there is no legal frame work that allows the head of state to cherry pick judges and also there is no reverse gear that allows a sitting President to return names of judges to the Judicial Service Commission (JSC) for further vetting. 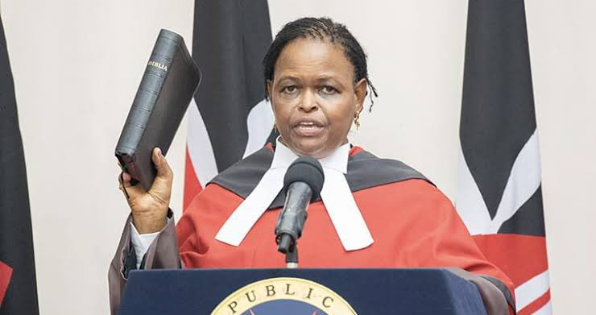 Kipchumba further states that Chief Justice Martha Koome should come out and strongly defend the judiciary just like her predecessor David Maraga, who was also in involved in heated exchanges between him and the executive. While being interviewed during the vetting for a new Chief Justice, Martha Koome promised to end the stalemate of the appointment of new judges by negotiating with President Uhuru, remarks that have elicited mixed reactions on social media as to whether she negotiated to have at least 34 judges appointed or not. Various political analyst have defended CJ koome stating that she is still very new in her new role but as time goes by, she will lead the judiciary very well. What do you think CJ Martha Koome should do in regards to continuous attacks from the judiciary?

What the Colour of Your Urine Says About Your Health

It's Tough Being One, Woman Wails As Popular Media House Attributes Uhuru's Arrogance To Luo Support

Docile Mood At Karatina University As Students Prepare For Examination