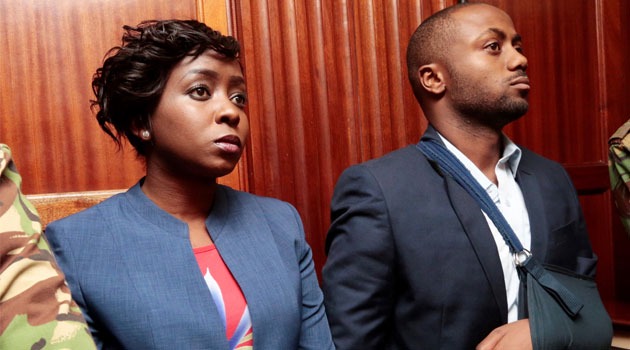 During the ongoing trial,the court was informed that Joseph Irungu alias Jowie actually shot himself inside former TV journalist's Jacque Maribe’s house a day after Monica Kimani was murdered.

Chief Inspector Eswari Njoki narrated to the court during her testimony that she was the investigating officer.

Jacque Maribe’s neighbours narrated to the police that Jowie actually shot himself in Maribe's house using a gun which he had borrowed.

The Justice Grace Nzioka was told by Eswari Njoki that Marine, Jowie and their neighbour known as Brian Kassaine had initially told her in their statements that it was three armed men who had attacked Jowie as he came back home from picking Maribe from work.Maribe was working as a news anchor at Citizen TV at the time.

It was actually Jowie who made the report on the 21 at of September at Langata police station stating that he had been attacked on the 20th of September outside Royal Park Estate as he was entering the estate.

At the time Eswari Njoki was treating actually Jowie as a complainant and not a suspect.

However days later, she was actually informed that he had been arrested and his actual statement was taken at the Muthaiga police station whereby he was being held.

However, Brian Kassaine’s wife known as Catherine actually contradicted the three statements and told the police that Jowie did actually shoot himself.

Chief Inspector Njoki narrated further that she decided to contact Catherine and invite her in for questioning after having consultations with DCI officers from Kilimani.

Catherine agreed to go to the station along withe her husband,Brian Kassaine.Catherine narrated how her husband was a licensed firearms holder and that Jowie would usually borrow it from time to time.

She went further to narrate that on the night of September 19th 2018, Jowie contacted Kassaine asking for paraffin but they dismissed him because it was very late at night.

The next day,Catherine asked her husband Kassaine why Jowie actually needed the paraffin but he told her that Jowie had dismissed the issue.

Catherine further narrated that on the night of September 20th, they were woken up by a bang on their gate and that when her husband went to open,he found Jowie lying on the ground bleeding.

She said that Jowie had been followed by Maribe and she was asking him and I quote "what did you do? Why did you do?" as she was standing next to him shaking.

Catherine narrated to the police that Jowie had actually shot himself using her husband’s gun in Maribe’s bedroom and that the other statements about being attacked were actually made up stories.

Kassaine who was then waiting for his wife to finish recording her statement was taken to a different interview room where he also confirmed that Jowie shot himself using his gun.

5 Life Lessons a Father Must Teach His Daughter

4 Things Women Do When They Are In Love With You

Ugly Scene Witnessed in Nairobi CBD as Two Men Fight Over Woman on the Avenue, Left Many Baffled