By HelenMalkia (self meida writer) | 24 days 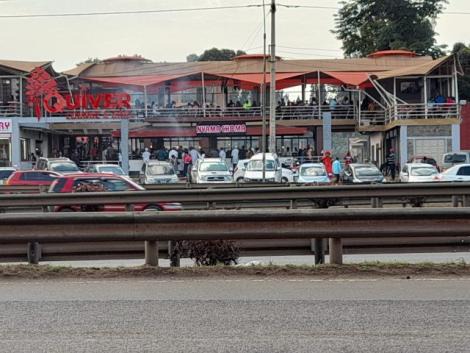 The suspect who was accused of shooting two policemen and a woman at Quiver Lounge and Grill has now surrendered himself to the Directorate of Criminal Investigations (DCI) headquarters alongside his lawyer Cliff Ombeta.

According to Kenyans.co.ke, Dickson Mararo presented himself to the DCI on Monday, July 5 accompanied by the lawyer. Mr Ombeta explained that his client was provoked by the two police officers which led to him pulling the trigger.

“He had been provoked quite many times by the officers who kept on hitting on his girlfriend and trying to talk to her even at the times he went to the washrooms, they would make passes and follow her everywhere she went,” he said as quoted by the media house.

Mr Mararo further claimed that he was not a gangster as purported by the local media but a reputable businessman in Nairobi. He also affirmed that he wasn't on the run but was leaving things to cool down before recording a statement with the police.

Nameless hurting after rumours that he sacrificed his friend to illuminati

"Mtaachana Tu", Netizens React After Arrow Boy And Nadia Mukami Did This During Their Vacation

"Sharp Are The Arrows Of A Hurting Heart," Kikuyu Secular Artist Dj Fatxo Thrown Into Mourning.