Over the 2015 Youth Development Fund scam, a Nairobi anti-corruption court punished a businessman Sh720.9 million, or 27 years in prison. 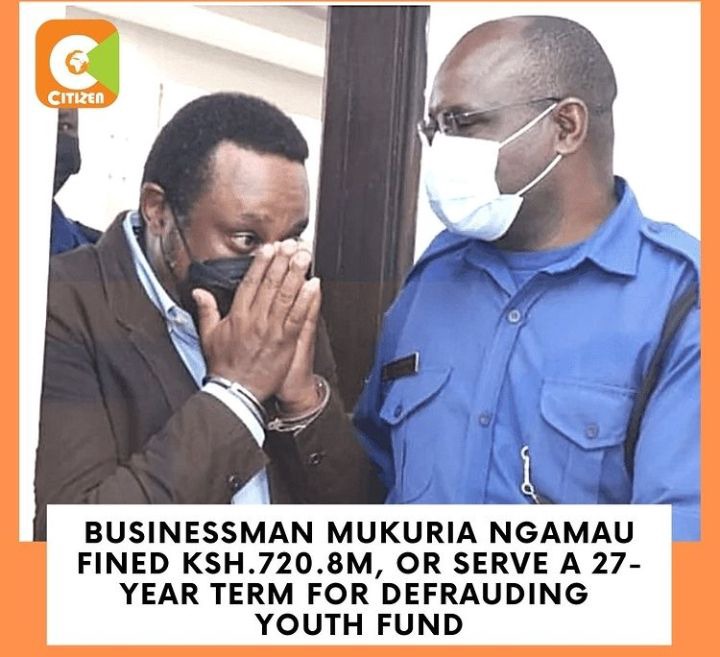 The prosecution demonstrated that Mukuria Ngamau, the director of Quorandum Limited, was fraudulently paid Sh180.4 million from the Youth Development Fund, according to Chief magistrate Douglas Ogoti's judgment.

Five counts of conspiracy to commit an economic crime, unlawful acquisition of public property, and document forgery were filed against Ngamau.

According to the court, between November 17, 2014 and May 4, 2015, Ngamau and his firm plotted to receive Sh180.4 million from the Youth Enterprise Development Fund for services that were never provided.

To testify against Ngamau, the prosecution called 31 witnesses.

He was prosecuted with his wife, Doreen Waithera, who was later exonerated of the charges after reaching an agreement with the State.

The businessman requested a non-custodial punishment, but magistrate Ogoti denied it, claiming that the penalty was dictated by the Anti-Corruption and Economic Crimes Act.

During an investigation by the Parliamentary Investments Committee, it was discovered that two multi-million shilling contracts were granted to Ngamau's company through single sourcing in violation of public procurement norms (PIC)

The accused admitted to the committee that he did, in fact, carry out the disputed payment.

In the first contract, Quorandam Limited was to deliver advisory services for an ICT strategy design in seven days for Ksh65.9 million.

The firm was to give advisory services on the specifications of the software to be used in administering the agency's operations in the second contract, which was worth Ksh114.9 million.

Ngamau made repeated withdrawals from the monies, according to detectives, and transferred the money to the private accounts of his relatives, including his wife Doreen Waithera Ng'ang'a and his mother Tabitha Wanjiku Ngamau.

The majority of the stolen funds were used to purchase luxurious residences, pay debts, and bribe powerful persons, law firms, and corporations.

Elected Mp From Nyanza Ditches ODM For UDA, Reveals Why He Fell Out With Raila

Why Mudavadi's Decision to Join The UDA Should Worry Raila Odinga