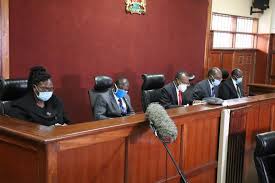 In a statement dated May 18,2021 KMJA meambers revealed that the five judges have been receiving threats since after decalring the BBI bill as null and void.

"On 13th May 2021, a five judge bench of the High Court deliverd the now faimous "BBI judgment",that has elecited various discussions.The judgment has since been appealed against .We urge everyone to allow the court of Appeal deal with the appeal.In the event of dissatsifaction a further appeal be made in the supreme court without resorting to any personal attacks. KMJA is therefore alarmed by the daily attacks directed into the individual judges who sat on the bench.Such attacks are an affront to the decisional indpendence of the judges and the rule of law," read the letter from KMJA.

KMJA has demanded on the investigations to be carried out on the attacks and the meambers also to be provided with security by the state.

"We call upon the inspector General of police to immediately investigate the said utterances with a view to prosecuting the culprits.The cabinet secretary incharge of interior and coordination of the National Government should immedietly assure kenyans that our judges and Judicial officers are safe given the sensitive nature of their assaignments.

"We also urge all the relevant officers of the government to immediately engage the Judiciary to ensure security of all judges, magistrates and Kadhi's,"they stated.

While appearing on a Tv interview Jubilee Secretary general Raphale Tuju warned the judges that they depended on the same government wich they were fighting.

Juja MP George Koimburi Reveals Details On Why Mt. Kenya Cannot Have A Candidate In 2022

Raila, Ruto Given Some Hopes On 2022 Succession Battle As New Claims Emerge On Mt. Kenya Division

Sakaja Discloses Why He Calls DP Ruto Frequently, But Not Calling President

"Will Your Marriage Still Stand Or you will come out crying" Netizens Sympathize With Diana Marua.