By Jacksmall.com (self media writer) | 7 days ago 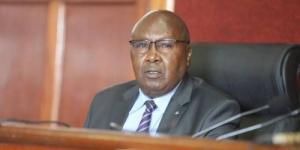 A popular lawyer was lucky to escape a trap where she would have lost Ksh2.2 million in a suspected online scam.

Justice James Makau on Friday, October 8, saved the lawyer who had been arrested by police over the Ksh2.2 million debt.

According to court documents, the lawyer was introduced to a scheme run by two men and she asked to invest Ksh777,000. The lawyer was duped by the man who had recruited her that she would make a profit of Ksh1.6 million.

She bought into the idea and make her initial investment of Ksh777,000 and also deposited Ksh90,000 as fees for opening and operating an account with the scheme.

A week later, the man who had introduced her to the digital currency scheme called the lawyer and informed her that he had borrowed Ksh2.2 million from his wife and invested on behalf of the lawyer.

The lawyer told the court that the man was now asking her to refund him the money he had spent to secure the digital coins. She went on to explain that she had not asked the man to invest on her behalf and his decision had shocked her.

When the lawyer called the other man who supposedly owned the scheme he informed her that the man did not have an account with them and he was not a shareholder in the business as he had earlier alleged.

According to the lawyer, the man started threatening her as he demanded she pays back the Ksh2.2 million he had borrowed. She further alleged that the man vowed to use his connections with the unnamed MP to get her arrested.

The lawyer was summoned to the parliament police station and released on cash bail. Justice Makau scolded the police, the Directorate of Criminal Investigations (DCI), and the Director of Public Prosecutions (DPP), over the case.

The judge stated that the police acted with impunity by using state machinery during the arrest and also by bringing criminal proceedings against the lawyer.

He further noted that the police harassed the lawyer and he also faulted the DCI and the DPP for acting in bad faith and in a discriminatory manner by putting police and DCI officers at the man's disposal.

"The criminal proceedings seem to be made to secure ulterior or intentions as it appears the police, DCI and DPP are hellbent on using the state machinery to intimidate and harass the lawyer," Justice Makau stated.

"This court noted further that the petitioner is a senior advocate of this court of more than 40 years' practice... Her reputation stands to be damaged before her clients on charges that are meant to achieve certain goals," he added.

3 Powerful Bible Verses That You Should Read Them Daily