Transport was paralyzed for hours along Waiyaki Way after residents rampaged on Tuesday morning, December 7, to protest the killing of six individuals by a cop.

The protestors blockaded the road at the Mountain View mall close to Kangemi. A section of them could be seen pilling up tires, rocks, and stones while others lit huge fires making the road impassible. 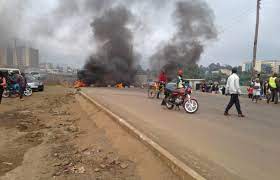 A huge traffic growl up developed as drivers halted their vehicles while moving toward the irate local people.

Armed with chants and raising high their helmets, a section of boda boda operators decried the injustice that saw six lives lost.

"It is high time that rogue cops are called out for their insubordinate nature. This has gone too far to the point of killing innocent youth, yet the government continues expressing that they are protecting the residents. When will this issue be tackled once and for all?" an irate resident addressed the media.

Local people called upon the government to dispense justice and prevent such incidences from happening again later on.

The riots erupted sporadically after news broke out that a cop, attached to Kabete Police Station, went on a shooting spree killing six people.

Media reports indicated that the officer started shooting at the wee hours of the night in Kabete area prior to heading to his wife's business premises (a wines and spirits shop). He later asked that she close go home.

In a turn of events, the officer is said to have picked a fight with his wife, whom he shot dead with his AK47 rifle. 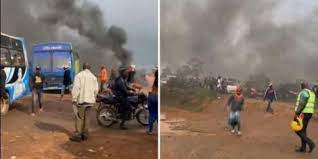 Neighbors heard the gunshot and upon rushing to establish what had happened he turned the gun towards them shooting five dead. He then, at that point, went to his vehicle and turned the gun to himself.

"He incurred injuries to the spouse's neck before he went to his vehicle and opened of the firearm on his chin and fired," an official told Kenyans.co.ke.

Details of the incident and the motive behind the officer’s killing spree are yet to be uncovered as investigations are yet to be completed. 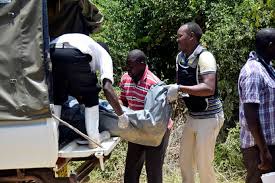