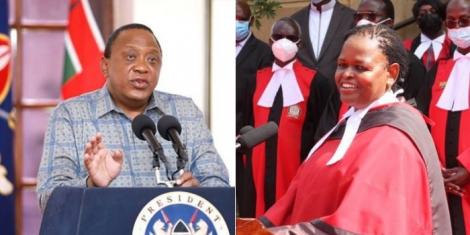 The decision by a three-judge bench ordering President Uhuru Kenyatta to promote six judges has strained the relationship between the Executive and the Judiciary yet again.

Chief Magistrate Evans Makori and High Court registrar Judith Omange are the other two. Uhuru refused to appoint these six in June 2021, citing concerns about their integrity.

"Upon the expiration of the 14 days, without Uhuru having made the appointment, it shall be presumed that his power to make them has expired and his office becomes functus so far as the appointments are concerned," the three judges ruled. "The six nominees shall be deemed duly appointed effective from the date of default as Judges of superior courts for which they were recommended."

They also directed Chief Justice Martha Karambu Koome to appoint the six judges once the deadline has passed. Experts argue that they will wait to see if Koome will defy Uhuru and follow the High Court's orders.

"The decision on the appointment of the six judges does not constitute a new indictment of President Uhuru Kenya." It is the most difficult test for Chief Justice Martha Koome. "She can only pass it by swearing in the six judges on November 5," said Nelson Havi, President of the Law Society of Kenya.

"The Constitution requires Uhuru to appoint the judges and does not allow for a different option. It's possible that the Chief Justice will be the one to decide whether or not to swear in the six. If they are sworn in and the case is appealed to the Court of Appeal, which overturns Koome's motion, the judges must be unsworn. We are in uncharted waters, so it is a very untidy situation "Charles Kanjama, a lawyer, also commented.

As she continues to steer her administration and patch things up with the Executive, Koome has previously taken varying positions on the rejection of the six judges.

Chief Justice David Maraga, her predecessor, was outspoken in his criticism of Uhuru for breaking the law and disregarding the Constitution on a number of issues, including the appointment of the six judges.

Koome, who took over from Maraga, insisted that she would not relent in pressuring Uhuru to obey court orders while also attempting to create harmony between the two branches of government.

"Uhuru Will be Active in Politics After 2022" Wambugu Says, Dismisses Ruto's Recent Rally in Nyeri