By Newzdoctor (self media writer) | 5 months ago 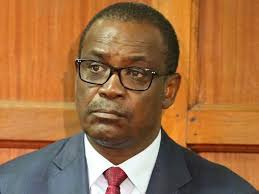 Mr Ogoti told the parties that the Judiciary would follow the guidelines issued by the Ministry of Health aimed at stoppng the spread of the deadly virus.

He said a courtroom,which can accommodate up to 38 people, has been set up and that those who cannot be there physically can follow the proceedings online.

"The application to adjourn the matter is therefore declined, " the magistrate said.

The charges state that they conspired to commit fraud, which led to the loss of Sh213 million at the Nairobi city county government between January 16,2014 and January 25,2016.

Other charges are conspiracy to commit corruption, abuse of office, fraudulent acquisition of public property, dealing with suspect property and unlawful failure to pay tax to a public agency.

Mr Kidero is said to have received Sh24 million from Lodwar wholesalers.According to the prosecution, he got Shi4 million from the company on August 24,2014 and Sh10 million on September 11,2014.

Before declining their request, the magistrate asked the accused if they have been vaccinated against coronavirus, It emerged that almost all of them have received the Covid-19 shots.

Content created and supplied by: Newzdoctor (via Opera News )

JUST IN: MoH Delivers A Good News To Kenyans As Covid-19 Cases Drops With Positivity Rate at 9.8%

What Cause Gray Hair To Deveop At Early Age