By Getugi (self meida writer) | 3 days 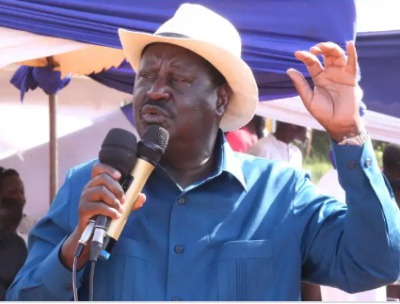 Speaking at Kalembe ndile's funeral today, Raila term Mutunga as an hypocrite. Raila told former Chief Justice Willy Mutunga that he has no moral authority to criticize the president on appointment of judicial judges.

Raila claimed that Mutunga in 2013 , he presided a nullification of president Uhuru elections despite given the evidence. Raila lectured Mutunga by telling him that he denied them Justice when he(Mutunga) was Chief Justice and there he should not pretend to seeking Justice now.

“The same Mutunga is demanding justice, yet he denied us justice when he served as the country’s Chief Justice. That is the hypocrisy of the highest order......You all know what happened in 2013. We rushed to court. We took all the evidence there. But the court said the evidence was submitted late. It is non-other than Willy Mutunga who pronounced those words," he stated.

This comes after the Willy Mutunga penned a letter to the president Uhuru criticizing the appointment of 36 judges while leaving 6 which is against to the constitution of Kenya. Mutunga told the president that the law should be adhered to but not negotiable.

The constitution of Kenya states clearly that the president should appoint the judges once vetted by the Judicial Service Commission (JSC). But the president decided to leave 6 judges claiming that they have integrity issues.

Content created and supplied by: Getugi (via Opera News )

Kumbe He Was Not A Joking Man, What Jakayo Midiwo Did In 2017 While In Parliament (Video)