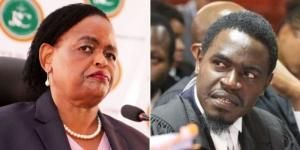 The bad blood between the outgoing Law Society of Kenya (LSK) President, Nelson Havi, and Chief Justice, Martha Karambu Koome played out at the hearing of the Building Bridges Initiative (BBI) appeal at the Supreme Court on Thursday, January 20.

Havi had exceeded the time allocated for his submissions, a factor that the CJ pointed out but did not seem to go down well with the outspoken lawyer.

The former LSK boss, however, did not take too kindly to the remarks - condemning the Supreme Court Judges over what he termed as a frivolous approach in the matter.

"I believe I have done my part or is there a follow-up question?" Havi posed.

"My Lady, time is not of the essence here, this is a serious enterprise. The Supreme Court only sits once every five years just to discuss election petition, what is the hurry, where are we going to?" a frustrated Havi lashed out.

The Chief Justice played it calm and replied with a serene 'Thank You'.

On the other hand, lawyer John Khaminwa heaped praise on the CJ - terming her as a remarkable woman and leader.

The lawyer went back in time - giving a history lesson of Wangu wa Makeri - arguably a fearless woman who rose to leadership position within the Kikuyu community. According to Khaminwa, men feared to be treated badly and took an oath never to be ruled by a woman again.

"We still have men chauvinists in our society who seem to think that you may turn out to be Wangu wa Makeri - someone who will not listen to them but we who have known you for a long time know that you will treat men and women equally," he stated.

He also lauded the Deputy CJ Philomena Mwilu for her bravery in weathering the storm raised against her during her tenure in office.

The bad blood between Havi and Koome has played out in the recent past with the hostility ensuing after the former wrote to the Judicial Service Commission (JSC) arguing that Koome wasn't fit to take up the Chief Justice position.

This led to a response from Koome who ordered Havi to retract his statements, which she termed as defamatory.

In an act of defiance, the former LSK boss pointed out that he would not apologise for his remarks, arguing that he was ready to take up the matter to court if need be.

"I perceive the letter (from Koome) to be an attempt to intimidate me from submitting, on or behalf of the LSK, information to the National Assembly on Justice Koome's competence, integrity and suitability as a judge and prospective Chief Justice," read part of Havi's statement.

The amazing thing Wetangula and Lusaka did today in Bungoma after submitting their names to IEBC.

Possible Reasons Why Raila's Campaign Team Is Pulling Huge Crowds In Many Parts Of Kenya-Opinion.