Title Deed Succession Process That Will Help You Avoid Fraudsters

By @fredrickameka (self meida writer) | 4 days 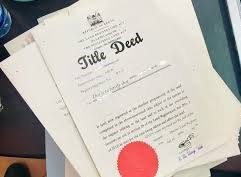 Then succession process has caused many Kenyans not to have title deeds, maybe because of the succession process or its expensiveness making it inaccessible and complicated. For one to inherit a land in Kenya, their is a process to be followed according to the Law of succession Act Chapter 160. Their will be land subdivision, survey and documentation then after their will be normal sequence of land control consent - subdivision survey - consent - transfer - title ( CSSCTT). This is the process of which you can acquire the title deed.

First is acquisition of death certificate. This is a document used to prove the death of the proprietor of the land. The process of succession cannot commence without this document. Obtain it from the registrar of the births and deaths in your respective sub-counties. If the death occurred years back when their wasn't enactment of the registration of deaths and births, then the registrar will issue a confirmation of death through a letter relying on information from the chief and time of death indicated.

The petition through valid Will of the deceased will be taken to court by the petitioner for a grant of probate to execute the Will then administer the land in accordance with the Will. The Will will be translated into a enforceable court order by the probate to be followed by the executor. Executer will now have the authority to deal with the property of the deceased in accordance with the Will. Note, in absence of a Will, the rules of intestacy will determine the question of who entitled to the property of the intestate

However, form P & A 80 will be filled, this is a petition for letter of administration intestate. The applicant will be allowed to file an official petition or a formal request to the court to be appointed as an administrator of the deceased's land. This is after the chiefs letter is represented together with searches and death certificate to the court. The attesting of the form is either done by a magistrate or a lawyer.

People who know the applicant, to fill form P& A 57. It is called guarantee by personal sureties. The signatures constitutes a guarantee by the guarantors to ensure the petitioner fulfills his / her mandate as promised in the petition papers. The guarantors may be then required to swear an affidavit to support the petition before the judge. Also the form P& A 80, 5 and 57 may be collected together from the court then filled at the same time.

Notice will then be made to Kenya Gazette by the court after receiving the petition papers , signed and attested. The notice gives those who might be interested a chance to raise objections within a period of 30 days. If no one will have no interest the petition will be allowed to collect the letter of administration. If an objection raised within that period the full hearing of all parties together with their witnesses is ordered. However form P& A 41, grant of letters of administration intestate may be issued to the petitioner if an objection is not raised within the period of 30 days. Administrator will have now power to administer the deceased's land . When ready he/she goes back to the court for the final documents.

Swearing of affidavit will now be launched . The petitioner will swear requesting for confirmation of grant as per section 7 (2) (4) cap 160 of the laws of Kenya and indicate how the land should be shared / divided among family members. Notice of motion to hear the application for confirmation grant is made and summons to appear before the judge by all parties concerned to confirm that they have agreed in manner which the land has been distributed by the administrator. The certificate of confirmation of grant is the issued under cap 160 section 7(1) and (3) form P& A 54 by the court. This certificate confirms the grant which allow each beneficiaries will get what they agreed from the deceased's property. Its a court order to be followed by all parties.

The name of the deceased upon the land will be transferred to the administrator upon his appointment by the high court in accordance to form RL 29. The administrator will have power to distribute the deceased's land in accordance with form offered by the High Court Executive Office. The land will be distributed in accordance with the agreed endorsed by the court of probate grant. This is the process according to the law on how to acquire a land of a deceased person or inherit it. Do not be coned by fraudsters!

Panic In Uhuru's Camp As Ruto Spill The Beans Over His Relationship With Uhuru, Says This Fearlessly