By Karadernews (self media writer) | 25 days ago 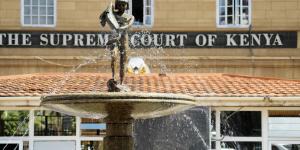 There was drama at the Shanzu Law Courts after a man disrupted the court proceedings and lectured the Judge.

In a video seen, the man identified as Gordon Teti, argued that the police officers arrested him but did not provide a reason for the same.

During the proceedings, Teti tried to raise concerns but the officers attempted to stop him, prompting the enraged man to boil with anger and lecture them.

“I was acquitted on the 24th of August. The court acquitted me because the police did not have any reason to arrest me and bring me before the court,” the man stated.

Teti proceeded to threaten that the character displayed by the police at the Shanzu Law Courts would make him sue them.

The defendant mentioned that his problems with the police and the court began on November 12, 2019 when he was arrested by the police for allegedly disregarding traffic rules.

He says that the police asked him for a bribe in exchange for his freedom, and when he refused to cooperate, he was arrested, detained and charged in court.

However, Teti says that his case was dismissed but ever since, the police have been frustrating him.

During the Thursday, September 30 proceedings, he requested to have the typed proceedings which proved that his case had been closed, but the officers instead pounced on him for making that request.

Surprisingly, Teti did not take their action lightly, instead, he interrupted the court proceedings and lectured the Magistrate for failing to do their job to ensure justice is served.

In his sentiments, Teti faulted the court and police for frustrating the common citizens instead of helping them.

“Is this a court? People come to court for fairness and justice, and not to be pounced on by police officers when they raise concerns,” Teti remarked.