By BespokeDMY (self meida writer) | 5 days

This year the march led by May Day workers was cancelled due to the pandemic in France, but the trade union said the protesting will happen since life has become tougher with no work for the workers. Families have been evacuated from their comfortable homes, some can't provide food for their families, children and students have dropped out of school and colleges/universities respectively and pensioners are struggling with their income.

The trade union known as May Day workers led a march in the French capital. The workers set fire to dustbins, Banks windows were smashed and they threw projectiles at the anti riot police officers, who responded with tear gas and stingball grenades. At least 34 people are detained.

The union said nearly 300 protesters were planned across France. The protesters wanted curfews uplifted and restrictions ended. the un-employment has recently doubled in France due to the restrictions and workers being laid-off work by companies and business owners.

The protesters again clashed with the riot police in the city of Lyon and 5 people were arrested. The march-led with 3,000 people despite the rain.

The protesters were on the streets across France demonstrating against President Macron's policies. 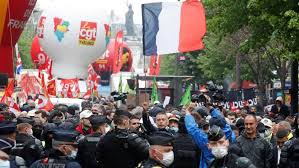 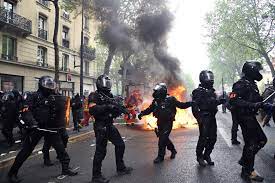 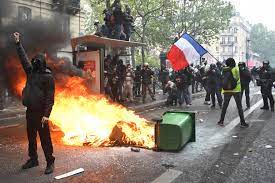 Content created and supplied by: BespokeDMY (via Opera News )

Tragedy In Machakos After A Boat Full Of Fishermen Capsized, Two Found Dead