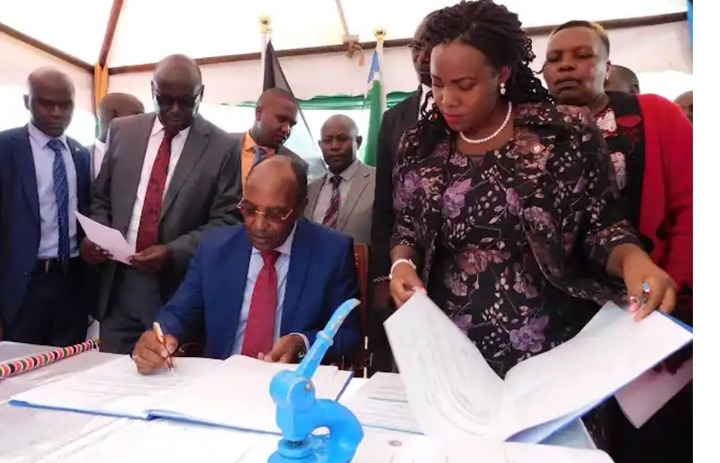 In 2019, strange scenes were witnessed in the county of Nyandarua. During the inauguration of the Ol Kalou Municipality Board and the launch of the municipality charter, the county’s Water and Environment CEC Simon Ng’ang’a attended alongside a young lady by the names Muthoni Wamuiya, who proceeded to actively participate in the oath-taking exercise of the day, as it emerged she was the acting county attorney. Just a couple of months later, she would be in court embroiled in a bitter case with the county governor Francis Kimemia.

The Employment and Labour Relations Court in Nakuru has ordered the Nyandarua County Government to pay Miss Wamuiya Ksh.10 million. In all, the county was directed to pay Kshs. 30 million to three former County Executive Committee members (CECs) for wrongful dismissal.

Each of the three petitioners will receive a compensation of Ksh.10 million.

Simon Ng’ang’a was the CEC for Water and Environment, Faith Mbugua was in charge of Education while Muthoni Wamuiya headed the Industrialization and Trade department.

Governor Kimemia dropped them from his Cabinet after failing to renew their contracts.

The three moved to court challenging their sacking which they termed as illegal and a violation of their right to fair administrative practices. They described the governor’s action as wrong and unfair, saying they learnt of it through the media.

“As the two-year contract term for my county executive committee members nears completion, and as we begin the new financial year July 2019 to June 2020, it has become necessary to reinvigorate my transformation agenda through injection of new strategic competencies and optimal performance and accountability of the citizenry,” said Mr Kimemia in a statement released on the night he terminated their services.

Mr Stephen Mwaura Njoroge was nominated afterwards to the position of Education and Social Services, while Ubuntu Life Foundation Director of Partnership and Fundraising Charles Wachira, who unsuccessfully contested for the Ndaragua MP’s seat in the last general election, was nominated to replace Mr Ng’ang’a in the Water and Environment docket.

Kamanda Opens up, Makes Public What Raila, Uhuru Are Now Planning Against Ruto