Court Issues Ruling for Man who Defiled his Step-Daughter

By OkumuGeorge (self media writer) | 3 months ago

In Kilifi county a man was charged having engaged in a forceful act with his stepdaughter who was 9 years old. This comes after alot of investigations yielding to evidence. The man was therefore confirmed to be guilty by Mpeketoni law courts securing him a life imprisonment.

On his judgement,Mr. Pascal Nabwana who was the presiding magistrate on the case said that the man's allegations were true and the man had no otherwise to denied. He also added that the accused had no convincing evidence to show that he is innocent because the young girl's witness confirmed that the girl was chewed in his presence. Following reports from two doctors, it was not clear that the accused gave wrong information to police on the health condition of the girl. 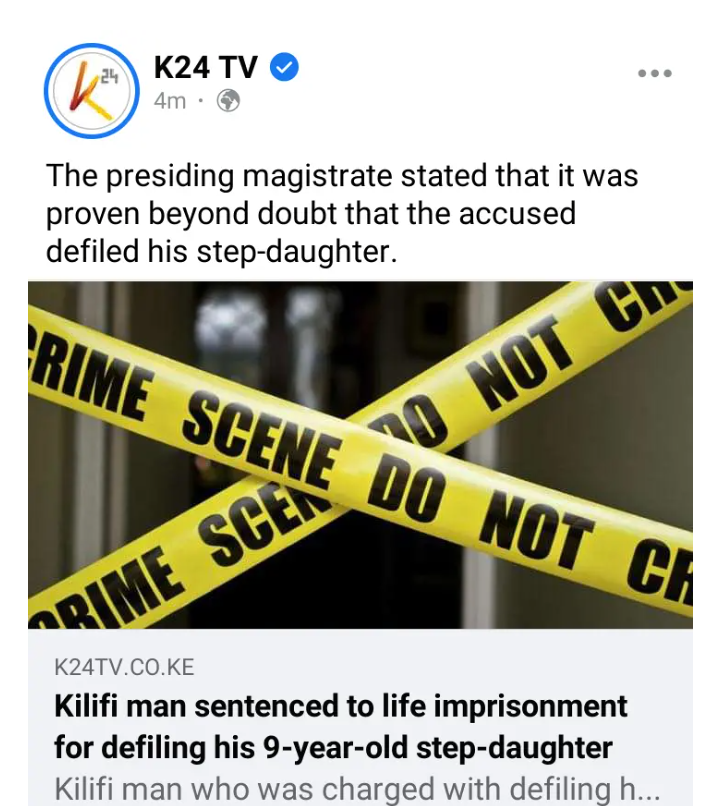 The magistrate continued to blame the mother of the girl for quickly rushing to the accused house and instead of giving out alarm, she cleaned up the girl and dressed her. The girl had been penetrated and abused leaving her private part bleeding.

In addition to continuos bleeding on the private, the young girl also had bad times at night due to the pain all over her body including the stomach which was unbearable and uncomfortable. The Magistrate then awarded the accused 14 days to appeal his sentence judgement.

My question is; Was the judgement right?

Content created and supplied by: OkumuGeorge (via Opera News )

Zora Citizen TV: Madiba Lands in Trouble With Nana, Zora to Choose Between Madiba and Fella

Rest in Peace; Muthee Kiengei Mourning Again Weeks After His Father's Burial As His Relative Dies.