By HeraldKing (self meida writer) | 26 days 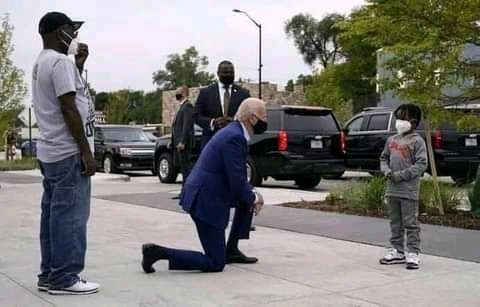 United States of America President Joseph Robinette Biden Jr was spotted kneeling before murderd George Floyd's son in what is seen as asking for forgiveness for what the police officers were accused of. Photo courtesy

In a photo that has gone viral on social media platforms, US President Joe Biden is reported to have asked for forgiveness from late George Floyd's son by kneeling before him. Floyd died after Minneapolis police officer knelt on his neck causing him lack of breath which led to his death last year.

There were protests largely in US and across the globe in what came to be referred to as Black Lives Matter. Several moments called for Floyd's justice too.

In compensation for the murder so cruel, George Floyd's Family has been awarded 27 million dollars, equivalent of 2.9 billion Kenya shillings. Former Nairobi Governor Mike Mbuvi Sonko has had his say on this move by the US government. "Ningezaliwa America ningekuwa billionaire sai," Sonko said which translates, "If I were born in America I would be a billionaire by now."

He took to social media to recount how he was harassed in the hands of law enforcers while serving as a Member of Parliament in the Kibaki era. Sonko said that he was attacked while defending the rights of his constituents in Makadara.

At that time, the minister of Security the late George Saitoti had to apologize in Parliament for the injustice done to the then Makadara MP. 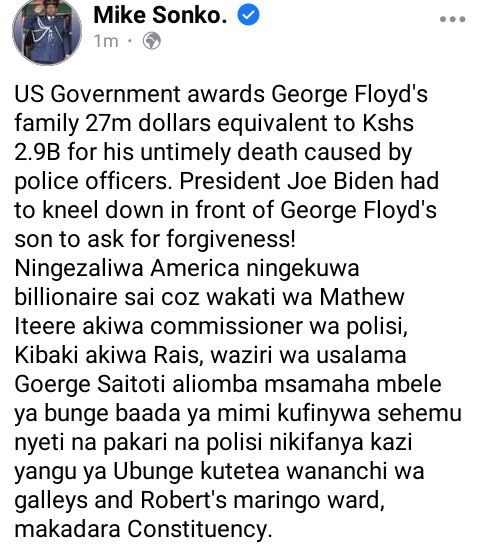