On Monday morning, Lady Justice Jessie Lessit ruled that the four accused in the murder of Lawyer Willie Kimani and two other person's have a case to answer.

According to Justice Lessit, sitting at Milimani Law Court made the decision after going through all evidences brought before her.

"“I have considered the entire evidence and having done so I have come to conclusions that the prosecution has established a prima facies case,” Lessit ruled.

After the decision, the court placed the five accused police officers on their defense following a move by the prosecution to close the case after hearing testimonies of 46 witnesses.

Willie Kimani, his client Josphat Mwenda and their driver Joseph Muiruri were abducted on June 23, 2016 shortly after leaving Mavoko court where they were pursuing a case against the police and later found murdered and their bodies dumped wrapped using polythene bags.

However, Lawyer Cliff Ombetsa said that they will call more witnesses whom they will hear their testimonies in a move to save the four accused APs, Fredrick Leliman, Stephen Cheburet, Sylvia Wanjiku and Leonard Mwangi charged alongside Peter Ngugi, the police informant. 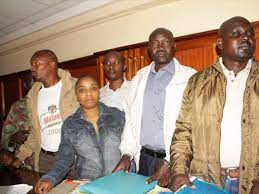 According to Ombetsa, Leliman's wife is expected to be called in together with other two APs to come to his defence.

Wanjiku will bring in 4 witnesses, Mwangi seven witness and Peter Ngugi one witness to the stand.

Other people expected to appear before the court coming Monday is OCS Makindu and OCS Mlolongo whom Ombetsa has requested the court to have them summoned and also to provide OB book for June 24, 2016.

Man Stabbed To Death Over Sh 400 Debt Only In Bomet