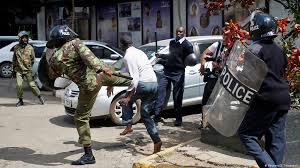 Kenya has been witnessing protests after protests in the last few days. The public and mostly the police department has been at loggerheads with most scenarios ending in a way that leaves score of people badly injured, others counting their losses while others in heartbroken as they lose their loved ones.

Many questions have always been asked as who is to be blamed on such scenarios or is it the way that civilians approach to such like a matter that always fuels all this ugly scenes. The police department headed by Inspector General Henry Mutyambai has been in the headlines wherever protests are in the country. Shooting at so called peaceful protestors is in the rise of late. This has left many Kenyans loosing their lives.

According to KTN News, One man, a tuk-tuk driver, has been shot dead by police officers after protests broke in Kahawa West, Kiambu County over kiosk demolitions.

"One man, a tuk-tuk driver, has been shot dead by police officers after protests broke in Kahawa West, Kiambu County over kiosk demolitions." Tweeted by KTN NEWS 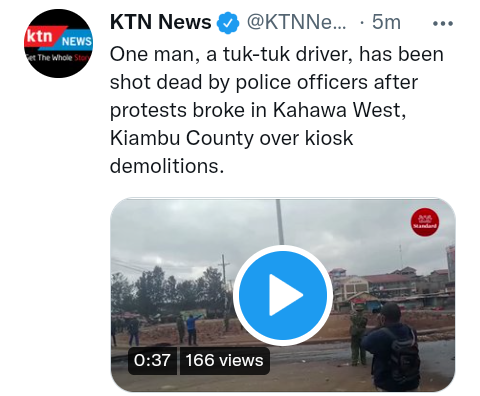 Safaricom Set To Perform System Maintenance For 4Hrs, Mpesa Services To be Unavailable

Notice: Mpesa Services to be Unavailable For 4 Hours From This Time

Safaricom Service Set to be Unavailable on Tuesday for 4 Hours