By MeshLanews (self meida writer) | 1 months 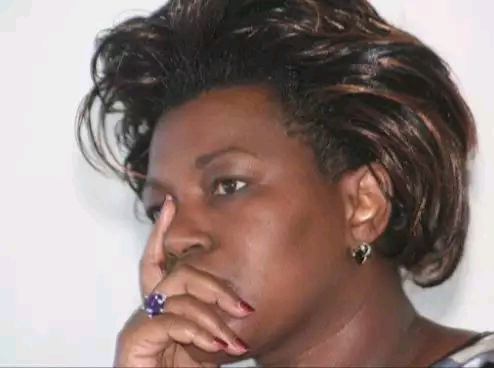 Kenyans have been asking, where did the vocal Nairobi super woman, Rechael Shebesh go? How comes we don't see her on our screens anymore? We don't see her in the public, what's going on with her? Many questions were raised without answers. The former Nairobi woman representative rechael Shebesh has been missing from the eyes of the public for years. A lot has been said about her absence from the public limelight for years now. Her absence saw her hat replaced from her docket by former Nairobi speaker Beatrice Elachi.

Sad to imform you that, for the first time Shebesh has spoken about the condition she has been battling for decades now. As stated by Rachel shebesh, she has been fighting a condition known as Bipolar which has taken a toll on her for the past few months. Speaking to NTV, Rachael Shebesh revealed that she has been seeking medical attention to tame the condition. 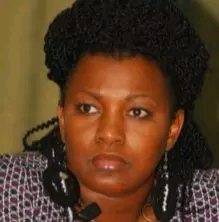 Bipolar is a mental health condition that causes extreme mood swings that include emotional highs (mania or hypomania) and lows (depression). When you become depressed, you may feel sad or hopeless and lose interest or pleasure in most activities. She has urged Kenyans not to be quick to judge people who look depressed because it might be as a result of Bipolar.

A credible source, NTV shared the news on their Facebook page as they reported, 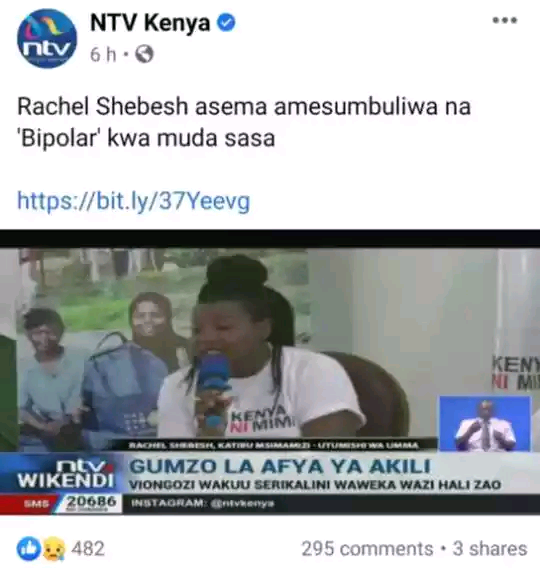 Kenyans reacted on the comment section and below is what some of them said,

@Morgan Remy, "So sad how people are joking and laughing about bipolar disorder or other mental illnesses wait until one of your close family members or children get it that's when you'll know it really exists and isn't a laughing matter, never laugh at something you know nothing about cause you never know when it's gonna come knocking at your door."

@Catherine, "So Kidero slapped a lady with mental issues? Bipolar is considered a mental illness. I think I have tripolar. There must be some tetanus in my brain."

@Hillary Musyoka, "Am very embarrassed and ashamed to know that my country people have no idea of bipolar and are too quick to spit hurtful words.Untill you find your sister or brother naked in the streets that's when you will know what mental illness and health is.

Bipolar is a very serious disease and no one in their right senses should be laughing or joking about such a disease."

@Rutere Kagendo, "May God help her out of it. Those close to her need to help her. We all are human and one time or another we face challenges. An praying for you my sister."

@Dorry Kiambi, "Such cases can be treated by Transcendental Meditation( TM) which brings one into state of calmness. If you have these mental related disorders, learn about TM via YouTube. It has other several importance."

@JackieJackie, "Such kind of people should be given moral support, emotional support and medication as well.Its not there wish to suffer from such kind of a disorder."

@Peter Kiilu, "Very bitter,, I also have bipolar but since I am poor I don't mind,may the healing fall on her."

How to Attend an Interview - Lessons From Justice William Ouko

"My In_Law's Accused Me Of Poisoning My Son To Death Because I Was A Stepmother To Him," Lady Narrates

"I'd Rather Work With OKA Than Ruto" Mukhisa Declares, Reveals These Less Known Facts About Ruto