By ProfW_News (self media writer) | 1 month ago 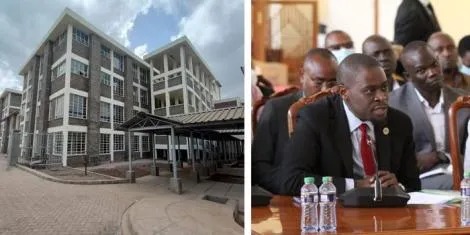 Nairobi Governor Johnson Sakaja on Wednesday, December 7, announced his government's plan to take over Mama Margret Kenya Hospital in Korogocho, less than a year after the facility was handed over to the national government.

Speaking before the Senate Health Committee, Sakaja said the devolution of the facility to the national government has put pressure on Mama Lucy Hospital, which remains the only referral center in the region.

As such, the governor said he is in talks with President William Ruto and Health Secretary Susan Nkhumicha to have the facility under the control of Nairobi County. However, he assured that the name of the ex-wife will be retained to honor the former regime.

The Korogocho facility was operated under the county government before Nairobi Metropolitan Services stepped in to upgrade it to level five. After its completion, the hospital was handed over to the Ministry of Health under the regime of retired President Uhuru Kenyatta.

“If you go to Mbagathi, the nurses and doctors are happy because they are happy, but if you go to Mama Lucy, they are not. Mama Lucy will relieve the pressure with the Korogocho facility," he said.

According to the Nairobi County Governor, his administration has implemented a restructuring plan to ensure that all health facilities are operational and patients are distributed evenly.

He said, all hospitals will have managers who will be assigned to ensure the smooth functioning of health facilities in delivering services to the public.

Furthermore, Governor Sakaja said that his government is working to remove bottlenecks that hinder the efficiency of health facilities in Nairobi. The governor said that many health centers that were opened during the previous regime were in a hurry and still could not serve the people.

After the woman died at Mama Lucy Hospital, City Hall was suspended, reports said she was unresponsive and struggling with excessive bleeding.

Calls for neglect in health facilities across Nairobi have led to the intervention of senators to determine the reality of the situation in public hospitals.