Phases and stages Of Syphilis

By SaimoMuInno (self meida writer) | 14 days 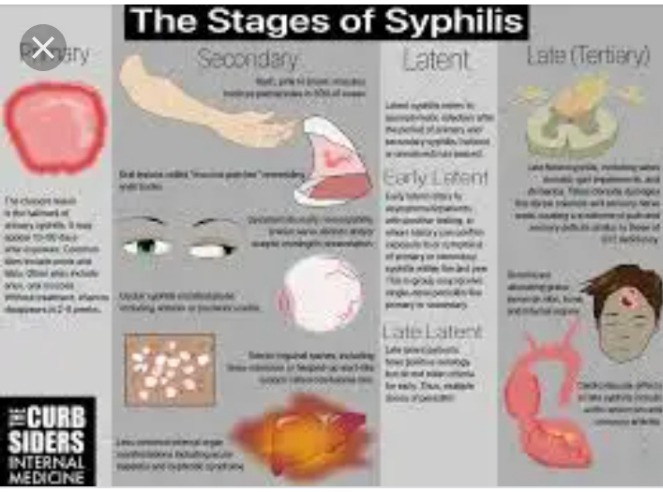 Syphilis is an infection that develops due to T. pallidum bacteria. These bacteria can spread between people through direct contact with a syphilitic sore.These sores may develop on the skin or mucous membranes of the vagina, anus, rectum, lips, or mouth.

These sores resolve on their own. However, if a person does not receive treatment, the bacteria remain in the body. They can remain dormant in the body for decades before reactivating and damaging organs, including the brain.

Doctors categorize the stage of syphilis as either primary, secondary, latent, or tertiary. A variety of symptoms define each stage.

The disease can be contagious trusted disease during the primary and secondary stages and, occasionally, the early latent phase. Tertiary syphilis is not contagious, but it has the most severe symptoms.

The symptoms of primary syphilis include one or more painless, firm, and round syphilitic sores, or chancres. These appear in ten days ti three months after the bacteria enter the body.Chancres resolve within two to six weeks. However, without treatment, the disease may remain in the body and progress to the next phase.

Secondary syphilis symptoms may resolve a few weeks after they first appear. They might also return several times over a longer period.

Without treatment, secondary syphilis can progress to the latent and tertiary stages.

The latent phase can last for several years. During this time, the body will harbor the disease without symptoms.However, the T. pallidum bacteria remain dormant in the body, and there is always a risk of recurrence. Doctors still recommend treating syphilis at this stage, even if symptoms do not occur.

After the latent phase, tertiary syphilis may develop.

Tertiary syphilis can occur ten to thirty years after the onset of the infection, usually after a period of latency during which there are no symptoms.

At this stage, syphilis damages the following organs and systems:

Gummas may also develop. These are soft tissue swellings that can occur anywhere on the body.Organ damage means that tertiary syphilis can often lead to death. Treating syphilis before it reaches this stage is, therefore, critical.

Neurosyphilis is a condition that develops when T. pallidum bacteria have spread to the nervous system. It often has links to latent and tertiary syphilis. However, it can occur at any time after the primary stage.

A person with neurosyphilis may be asymptomatic for a long time. Alternatively, symptoms might develop gradually.

Congenital syphilis is severe and frequently life threatening. T. pallidum bacteria can transfer from a pregnant woman to a fetus through the placenta and during the birth process.

Data suggest that without screening and treatment, about seventy percent of women with syphilis will have an adverse outcome in pregnancy.Adverse outcomes include early fetal or neonatal death, preterm birth or low birth weight, and infection in infants.