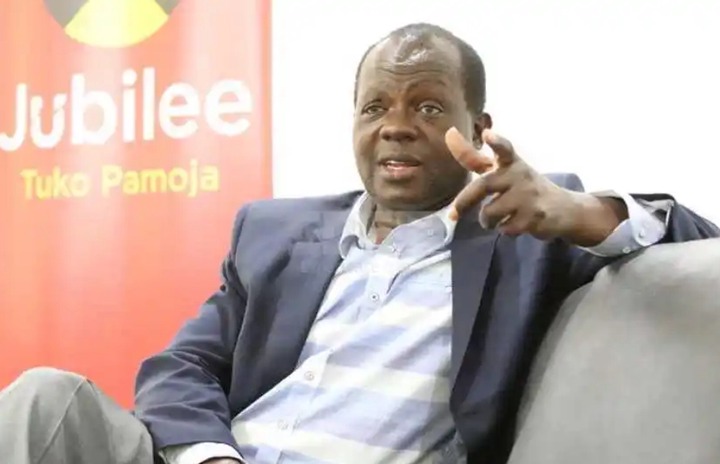 Economist and Deputy President William Ruto’s advisor David Ndii is one individual that has never shied away from controversy and now his latest battlefront has to do with Jubilee Secretary General Raphael Tuju and his HIV record.

On Twitter yesterday, Ndii jumped on a tweet by Kenyan History which was explaining the Jubilee Secretary General Raphael Tuju’s professional history briefly. The tweet read,

Did you know Raphael Tuju was the first news anchor for KTN in 1989. Previously he worked for Voice of Kenya (KBC) where he taught Kenyans on HIV. That was long before he joined politics in 2002 as member of Parliament for Rarieda. He serves as jubilee party sec gen today.

Ndii, who didn’t completely agree with the timelines provided in the tweet, dismissed it, claiming that Tuju began working on the HIV initiative, not after his time in KBC but in fact, after. He wrote,

*subsequently not previously. there was no HIV/AIDs advocacy in the 80s. In 1990, the Government was still in denial.

While Ndii has rarely had any direct run-ins with Tuju, he frequently tears into Tuju’s boss, president Uhuru Kenyatta.

Tuju worked as an anchor for TV news in the late 1980s and early part of the 1990s on a part-time basis. He was a producer and director of several documentaries, radio and TV commercials for international agencies, public sector institutions, and private-sector bodies. He was a columnist for local newspapers notably the East African Standard.

As for his HIV activism, Tuju has said in the past,

“I mainly addressed health and human development issues in my communication career with HIV/AIDS and Gender Empowerment being the main subject matter and in which I am credited with some of the major ground breaking mark in Kenya.”