By Fasihibrand (self meida writer) | 27 days 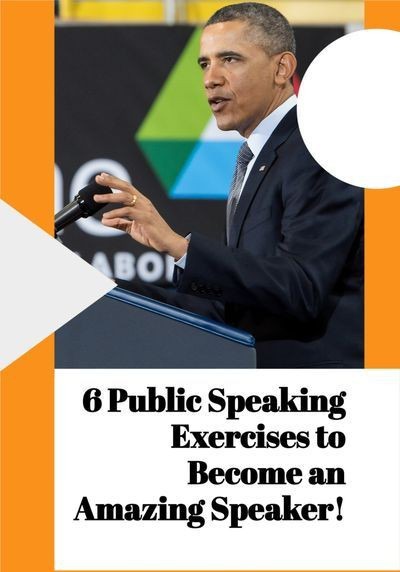 Here’s an easy way to ruin any speaking engagement:

If at any point you let the fear and anxiety take over, your breathing will become more shallow and faster. It’s the same kind of reaction to having a panic attack.

And it’s easily noticeable in your voice!

The result is speaking at a (too) rapid pace, possibly a higher-pitched voice, and you’d be making more mistakes as you stumble over the words you’re trying to quickly blurt out.

You’ll instantly come across as less authoritative and trustworthy!

What you want instead is to breathe calmly, and to embody that calmness and makes you appear more confident. Ideally, you want long, deep breaths that come from further down towards your stomach.

So the first task is a simple breathing exercise.

Speaking Skill 2: Knowing What to Say

Are you familiar with Jerry Seinfeld?

He’s been one of the most popular comedians and he’s got his own TV show that is named after himself. There is no doubt that he has done very well for himself, but do you know why that is?

When asked what the key to his success was in an interview he told the reporter that he made sure that he would write at least 1 joke every single day!

It is that habit that got him his success, not his performances.

Speaking Skill 3: The Art of Comedy

This is crucial in pretty much all human interaction.

Even when you’re doing public speaking in a business setting, you need to find a way to work in some humor. Otherwise your presentation will quickly become incredibly dry and boring.

You’ve definitely heard people do this.

Whenever someone is speaking, but uhh… they’re not 100% sure of what they want to, uhh… articulate, they uhh… they start making these “uhh” noises when they speak.

It can get pretty awkward real quick!

Both in conversation and public speaking, having these uhh will make people think that you’re unsure, don’t know what you’re wanting to say or nervous.

Great communication is not an accident!

When you see a great speech or interview, note that those people do most of that on purpose. There are some things that happen unconsciously, or are simply that person’s character, but most of it is purposely done.

Which is great for you!

Knowing this, you can learn a lot from watching some of the best speakers in the world. But you can’t just watch and listen to other speakers, and expect to learn automatically.

You need to analyze it!

You need to look at a certain speech (perhaps a few times) and identify the things they do to get the desired outcome.

At least 70% of our communication is non-verbal.

Professor Albert Mehrabian has done research and found that roughly 55% of communication consists of body language. About 38% of your communication is how you say things. That leaves only 7% for the actual words you use!

Yet this last part is where most people put most of their focus. This is a shame because the perfect lines delivered poorly will result in a bad talk overall!

Again, public speaking is a learnable skill. If you’re just starting on your journey, first figure out where you should improve upon first and then use the right public speaking exercise above to train that skill.

Here are the main areas to focus on:

• Knowing the right words to say.

• Using the inflections of your voice.

• Knowing when to pause for a moment.

• Using your body the right way.

Each of those areas are broad and will take quite a while to master, but even taking the first couple of steps will make you a lot better already!