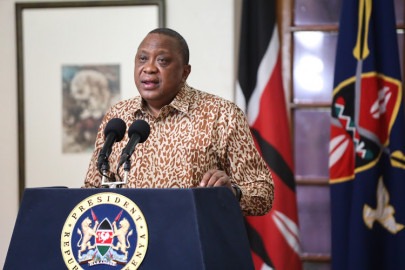 President Uhuru Kenyatta stated that Kenya has achieved significant success in curbing the spread of HIV/AIDS in recent years, adding that new cases have decreased by 68.4% from 2013 to this year.

During the same time period, the President claimed that HIV/AIDS related deaths had decreased by 67 percent, from 58,446 in 2013 to 19,486 this year.The favorable indicators, according to the Head of State, are due to increased government expenditure in the diagnosis, prevention, and management of HIV/AIDS and related disorders.

"This encouraging success can be credited to a rise of 83 percent in the number of patients receiving life-saving antiretroviral medication, from 656,369 in 2013 to 1,199,101 in 2021," he stated.The President spoke in Nakuru County on Wednesday as part of a national commemoration of World AIDS Day, which was also addressed by Nakuru Governor Lee Kinyanjui and Heath PS Susan Mochache.

President Kenyatta praised Kenyans for voluntarily participating in initiatives aimed at curbing the spread of HIV, saying the country was among the leading African countries in terms of access to antiretroviral therapy.The President pledged that the government will continue to do all necessary to battle the disease while directing the ministries of health and national treasury to guarantee that the country is fully stocked with HIV management and preventive goods.

"HIV continues to be one of the world's most serious public health issues, as my government knows. More importantly, HIV disproportionately affects our society's most vulnerable members: the impoverished, marginalized, children, women, adolescents, and young people.

"Furthermore, the epidemic persists in the 15-to-49-year-old age group, which is our society's most productive cohort. As a result, we must maintain our successes, accelerate progress, and close all gaps that prevent us from eradicating this pandemic "he state.

At the same time, the President expressed concern over the rising number of adolescent pregnancies in the country, claiming that the sad state of affairs was jeopardizing the country's socioeconomic reform goal and progress toward eliminating HIV/AIDS as a public health danger.

Health Permanent Secretary Susan Mochache claimed in her speech that numerous government programs, such as the Linda Mama maternity health program and First Lady Margaret Kenyatta's Beyond Zero initiative, have led to a decline in HIV/AIDS infections in Kenya, as evidenced by data.

Governor Lee Kinyanjui of Nakuru reiterated the President's concern about the rising number of teenage pregnancies in the country, claiming that the situation was fueling an increase in HIV infections among adolescents.