Always Remember That Life Is a Marathon 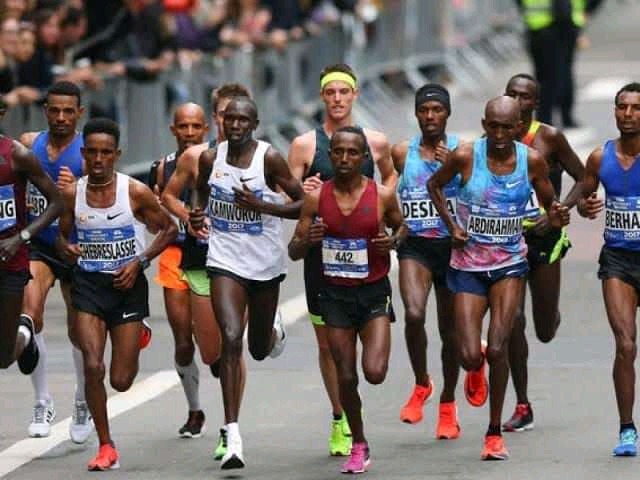 It is often said that life is a marathon and not a sprint. One major difference between a sprint and a marathon is that sprint is a short race at top speed. Whereas, Marathon is a long race with a lesser speed.

In life; both speed and endurance is necessary to emerge victorious. But you must learn to prioritize which is needed most at any given time.

Just the other day I was watching a Marathon race and many salient lessons started flowing through my mind.

SALIENT LESSONS FROM A MARATHON RACE

1.To run a marathon; you need endurance and perseverance. Life is not a sprint that you use all your energy to run at once; you need to conserve some energy, endure and persevere with the challenges on your way. Don't just focus on your pace.

Most people that focus on speed rather than endurance while running a marathon rarely finish top. Because they must have succeeded in using and exhausting their energy when it does not matter.

2. In running a Marathon overtaking is allowed; but the fact that someone overtook you doesn't mean that you can no longer emerge winner.

As I was watching the over 2 hours race. There was a particular guy who started as the pace setter, as times goes on; I couldn't see him setting the pace again.

Just then; another guy started leading the race. Not long; a different guy overtook him and started setting the pace. It got to a time that I couldn't see the first guy leading and I thought this new pace setter will be the winner of the race.

As they drew nearer the mark, the guy I could no longer see, came close, overtook and started taking the lead. And immediately; I became his fan and wished he finished first. As I cheer him, then I saw two other guys charging fast on him as they drew closer to the final kilometer.

To my joy the guy finished first, then to my amazement; the guy that was first earlier on, finished fourth.

Then another salient lesson pump into my mind that I don't need to bother myself with whoever overtook me in life. Because life is not a sprint; but a marathon. All I need is to keep going until I finished my race. The fact that some people are ahead doesn't mean I can't finish strong and top.

3. Finishing a race is very important even if you did not win.

As I was watching the marathon; so many people had finished and others were still running their own race not minding whether some had finished already.

Just when me and my friend watching the race were saying serious men had already finished their race, these ones are still running. Then I heard one of the commentator said that is important you finish the marathon even if you didn't win. It helps your psyche to know that you have the strength and ability to do it, just that your pace and timing is not good enough.

This is a lesson that I don't have to quit a task even when a winner has emerged. Everyone has his own race to run at his own pace. It doesn't matter who has finish before me, I must keep running until I get to the final mark.

4. As each runner finishes the race, they went to pick a pack. This shows that there is a general reward for everyone who endures and finishes a race; not just the first or winner.

So I enjoin you to endeavor to finish every task that you have started; never mind who had finished before you, never mind who is mocking or calling you lazy.

5. As I watched; the eventual winner for the women race kept checking her time even when nobody was close to her.

The commentator said that she was checking her time so as to beat her previous record. I then draw another salient lesson that I am only in a competition with myself and not with other people.

My aim is to strive to be better than who I used to be; not to be better than any other person around me. Because I have my own time and race to run. And they have theirs to run too. We get so much distracted while trying to run with other people's time and this hinders us from harnessing our full Potentials.

I think life's race will be much easier for us as people if we choose to run against ourselves and not against other people.

6. All the athletes had a game plan as none of them were in a rush to take an early lead. Because if you waste all your energy at the beginning of the race; where will you get the energy to carry you through when it matters most?

I learned here that I must have an action plan for whatever task I engage in and must learn to stick with my plans; except there is need to change tactics for better performance.

At every milestone; the athlete were provided with a spot where they can get fluids to rehydrate (water and soda drinks). I noticed none of them picked the soda drinks, they all went for water.

And even as they picked the water; they just sip a little and discarded the remaining in the bottle.

None drank with the intensity of their thirst; neither do they went for the soda drinks which contains some sugar (glucose) which could have given them more energy; but cause more thirst.

Again; I learnt that I must live my life in moderation. Moderate my food and drink no matter the luxury or quantity given to me if I must reach the mark of my race.

Today, uncontrolled appetite (food and drink) has made many lost the race of life. It has made many obese and many has lost their lives through what entered their mouth. Excessive food and drink will lead to excessive weight which might reduce your pace in life's marathon.

So watch what you eat and drink.

I learned here that for me to make the necessary progress in life. I have to cut off from every load and weight that does limit or hinder my journey. The reason why we are not running well or winning the race in different aspect of our lives is because we have not decided to shed off all those excessive weight we carry about that are limiting us.

Dear whoever is reading this; life is a marathon and not a sprint. Don't waste all your energy at the start of the race. Neither should you allow yourself to be distracted by whoever is ahead of you. Run your race; I run my race. We shall all get to the mark at our own time if we don't quit.