Urine and the Urinary System

Are you finding white stuff in urine? Urine is the body's way of dispelling fluid waste in the body. The fluid primarily comes from the kidneys which filters the water, stores it in the bladder and removes the entire excess amount. This not only keeps the body devoid of toxins but also helps keep the balance between water and chemicals.

Despite being 'garbage' however, urine plays a vital role in assessing a person's health. The frequency, amount, color, and even what you experience during urination can tell a lot about how your body is functioning from the inside. For example, frequent urination can be a sign of diabetes while pain while urinating could indicate an infection.

This is why it's usually a good idea to check your urine to see any abnormalities in the fluid. This way, you'll be able to seek help as soon as possible, preventing the development or worsening of other health issues.

What is Normal Urine?

Normal urine is devoid of white particles and has a color of pale yellow, gold, or any other shade in between those two. If your urine is transparently white, that means you've been drinking too much water – likely more than the recommended 8-glasses a day. If this isn't the case however and your urine is still white, chances are you're currently taking a diuretic, a medication which flushes out water in your system.

Once your urine adapts a honey color or a muddy brown, this is a sign of dehydration. Introduce fluids to your system as soon as possible to prevent complications. It could also be a sign of kidney and liver problems in which case, seeking medical help is critical.

Proteinuria or White stuff in Urine

Finding white stuff in urine is definitely an abnormal occurrence and should be handled swiftly. It's usually a good idea to take a good look at the urine and discern the exact nature of the white stuff. Are they grain-like in structure or are they long and stringy? Is it a solid mass? Also take note of what you felt during urination. Was there pain or did you in way feel the white stuff as it expelled from your body? Pay attention to the frequency of this white stuff in your urine.

A medical term for the phenomenon is proteinuria, which is a condition wherein protein leaks into the urine, causing notable white stuff in the waste liquid. Proteinuria is a symptom in itself, which means that if you want to solve the problem, you'll have to narrow down the possible causes of the condition. 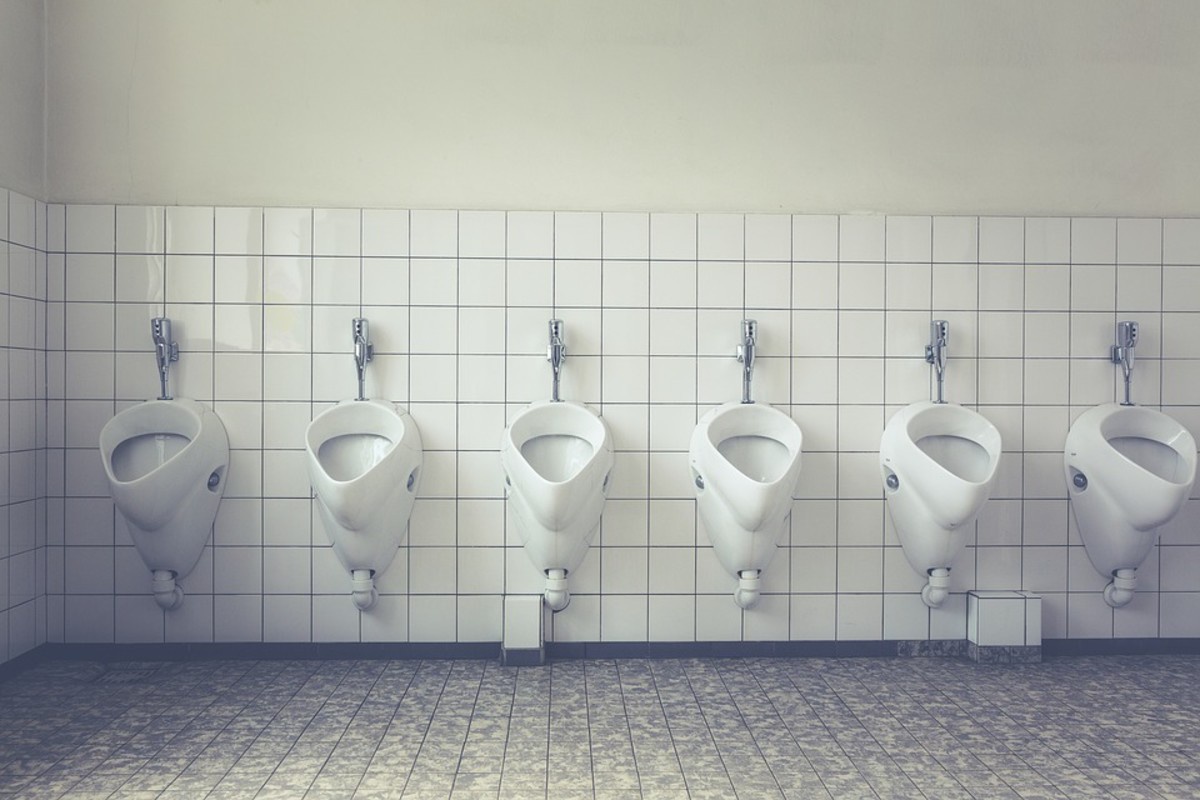 There are several possible causes of white stuff found in the urine, and they're not always as bad as you think! Considered as a symptom of another underlying condition, the main problem can usually be solved quickly and through convenient methods. Here are some of the possible causes of finding white stuff in your urine:

Phosphate debris can be expelled through the urine and if this is the case, there's really no need to worry. Phosphate may appear crystal-like in the fluid and usually results from eating too much food that contains phosphorus. Phosphorus is actually important in the body as it aids with the development of bones and teeth. Too much however becomes non-essential; hence the body disposes of it through your urine.

Kidney stones are also a possible cause of white stuff in urine. The white stuff is also in the form of sediments – like pieces of sand expelled from your body. The good news is that kidney stones don't always require surgery for treatment. In many cases, all you have to do is increase your water intake so you can flush out these kidney stones. Eating asparagus should also make it easier to you to spot these stones during urination as the urine takes on a greenish coloring. However, if the stones are already too much or too big, surgery might become necessary.

Urinary Tract Infection or UTI stems from the presence of bacteria on the opening of the urethra. As the urine passes through the opening, it catches some of the bacteria, causing it to have white particles floating on the surface. More often than not, UTI also presents as cloudy urine so if these two symptoms show up together – make sure to check with your physician ASAP. UTI is fortunately, a common condition that can be easily treated but left alone, it can cause irreparable damage. The bacteria in particular can spread to other parts of the body including the kidneys.

Several kinds of parasites can appear as white stuff in urine. This includes:

Filariasis - unless you've been vacationing in the tropics, it's unlikely that you'll suffer from this parasite. Filariasis is mainly caused by roundworms that feed on the blood. The most common symptom of the problem is elephantiasis or the thickening of the tissue as the worms lodge in the lymphatic system

Schistosomiasis - another tropical condition, Schistosomiasis is characterized by diarrhea, abdominal pain, bloody stool, and blood in the urine. It's also known as snail fever primarily caused by flatworms

The first two are worm-like parasites that look like white threads. Trichomoniasis on the other hand is an infection that causes mucus threads expelled through the urine.

This is a condition that occurs only in women, characterized by an overproduction of an already existing bacterial in the vagina. This is actually a very curable condition so asking for medical help as soon as possible should clear up the problem in a matter of days. Following are some of the symptoms to watch out for that indicates BV.

.A foul or fish smell of the vagina

.Itching around the vagina

.An increase in the amount of vaginal discharge which can be either white or gray in color

If these symptoms are present together with white particles found in the urine, there's a good chance that you're suffering from BV, which can then be addressed through proper medication. Oftentimes, the test for BV also includes a vaginal swab to test the discharge.

Candidiasis and Monilia are two types of yeast infection that can cause this particular symptom. Monilia Yeast growth is triggered when the pH levels in the vagina undergoes a rapid change. This can be due to several factors, most likely dietary issues.

Since Monilia is something that normally exists in the vagina, it’s not a good idea to eliminate it completely. Instead, the goal is to limit the amount down to tolerable levels. Fortunately, there are some medications available today that makes this possible. With a visit to the doctor combined with a change in dietary lifestyle, individuals can easily stop this infection from spreading.

Candidiasis on the other hand is much more common than Monilia but comes with basically the same symptoms. It’s a fungal infection and although it can appear in the genitalia, you’ll find that it can also grow on the skin, under the nails, and even inside the mouth. The condition isn’t a sexually transmitted disease but those who have candid are discouraged from having intercourse until the problem is fixed. This opportunistic fungal infection doesn’t usually occur in healthy adults. Most of the time, you’ll find them in children or those who have a weak immune system.

Proteinuria or white stuff in urine is also indicative of a kidney problem. The kidneys act as the body's filter and protein found in the urine means that the kidney isn't functioning as well as one would want. Now, there are several reasons why the kidney undergoes through the problem and it's a matter of figuring out exactly what is causing the stress to the kidneys. Although it's perfectly possible to nurse the kidney back to health, there are instances when the problem is irreversible and the body must be supplemented with additional filtering measures to get rid of toxins.

Don't experiment too much when it comes to kidney disease treatment. Keep in mind that anything that isn't helping your kidneys is actually making it worse due to the unique nature of this organ. It filters all the bad stuff, which means that wrong treatment choices can actually cause further scarring of the kidneys.

High blood pressure is not the direct result of white stuff in urine or proteinuria. Rather, a possible condition leads to kidney failure that eventually causes white stuff in your urine to appear. High blood pressure is an asymptomatic disease, which basically means that there are no obvious symptoms that can indicate hypertension. Individuals most at risk however are the obese, those who smoke, and those who drink. Age is also a factor, which is why it's important to constantly check your blood pressure upon reaching a certain age or if you drink, smoke, and take any sort of medication.

High blood pressure damages the kidneys through the persistent pressure of the blood crashing into them. Over time, the pressure damages the organs and even worse, makes it difficult for the organs to repair themselves. It's a given that hypertension doesn't just hurt the kidneys, but also every other organ in the body such as the heart, the liver, and more. High blood pressure is dealt with through medications and dietary changes.

Diabetes is another condition that's been known to trigger a wide number of health issues including kidney problems that eventually lead to white stuff in urine. It's a common and highly popular condition especially since a large number of people today are overweight or obese. Diabetes interrupts blood flow and causes abnormality in glucose levels, which causes damage to all organs in the body, including the kidney. Diabetes is best handled by a combination of medication, healthy eating, and exercise.

When to See Your Doctor

For the sake of safety and if you can't think of any other reason why there are white stuff in your urine, it's best to visit the doctor as soon as possible. Do not wait for other symptoms to appear before visiting your physician. Since you won't be in the position to fully scrutinize the white particles as well as their size, shape, and consistency - a laboratory test would be indispensable.

More Than 80 Cases of Monkey Pox Confirmed in 12 Countries