"Sat Up, Hugged Me and Died in my Arms," Man Recounts How Pregnant Wife Died as Doctors Stalled

By TheDailyOnlinePunch (self meida writer) | 15 days 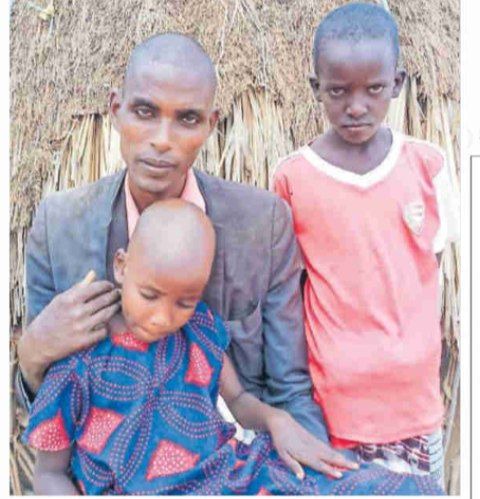 Photo: Troubled Abdirahman Abdi Sits Outside his House with his two children

Sitting outside his grass thatched house in Umoja areaTana River County, Abdirahman Abdi has not forgotten the last moments he spent with his dear wife Hamido Dakane on last week Wednesday night before she succumbed to her labour pains as a result of doctors' ignorance at Hola county Refferal hospital. 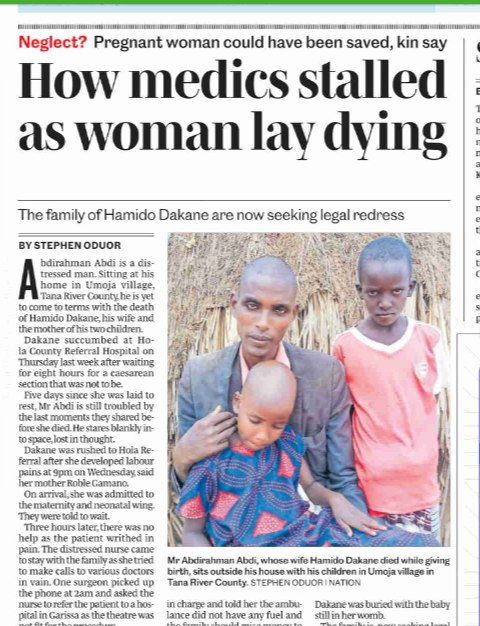 According to her mother Gamano Roble, her daughter was admitted in the maternity neonatal wing after they took her to Hola hospital on Wednesday night. Three hours later, she had not been attended to and writhing in severe pain.

A concerned nurse came to their side to console them as she tried making phone calls to various doctors without success. One surgeon picked up at 2am and asked the nurse to refer the patient to a hospital in Garissa since the theatre was not fit for the procedure.

The doctor advised them to lie to the Garissa hospital about where they came from or elese they would not be attended to. " They told us to say that we come from Charidende which is 70Km from Hola yet we come only 14km from Hola hospital," said Gamano.

Problems didn't end here. The nurse informed them there was no available ambulance driver during that time. One driver picked up the nurse's phonecall at 3 am but insisted on going for his morning prayers at a mosque before he could report to work .

The same driver later called with another excuse alleging that his ambulance hardly had any fuel. He asked that the family produces the money to source for fuel that is usually catered for by the government.

As the family continued with the fuel money fundraising, the patient ( Hamido Dakane) gathered her strength, sat up, hugged her dear husband as she breathed her last. She died in his arms. At 5a.m Dakane's body was bundled into a pick up and taken home.

Dakane was buried with the baby still in her womb. According to the family members, Dakane would have survived if the hospital acted promptly. The family is seeking legal redress.

Man Does The Unthinkable Moments After His Brother Died, Neighbors Confirm He Was Looking Stressed

Nameless hurting after rumours that he sacrificed his friend to illuminati

The Beauty Along Thika Super Highway.

Breaking: Curfew Extended, Kenyans Asked To Do This From Today