By SkyJuniorUpdates (self media writer) | 17 days ago

The self made Chef Dennis Ombachi was yesterday declared the best Tik Tok content creator in the year 2022 in Africa. This was after Chef Dennis shared a lot of videos in his social media pages displaying his skills in preparing different type of delicacies and attracting very huge numbers of followers and fans. 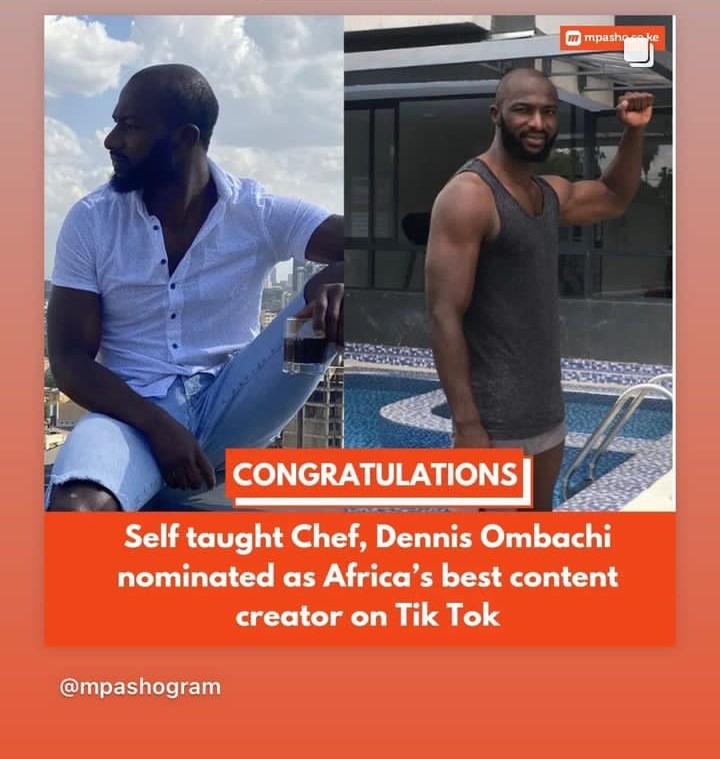 This was after Ombachi confidently shared a post on his instagram page that he had been nominated as Africa's best content creator on Tik Tok and he was sure the only thing he was going to lose was the dress code. After announced winner, Dennis Ombachi shared is background career where he was a sportsman where he played rugby. He was an international rugby player where he played for Kenya national team seven asides. He was a member of the squad that competed and won at the 2013 Rugby World cup sevens in Russia. He shared that his inspiration after sports is that she loved cooking and he decide to take it as a career after sports.

Chef Dennis Ombachi dedicated the award to his love of her life and their beautiful babies, and further thanked them for hustling to dress him an hour to the event and he also dedicated the award to Kenya, Dennis said in his acceptance speech. Many of his fans have gone online to congratulate him for the good work and efforts he had putted in place to come out with the victory against the tough competition from countries like South Africa, Nigeria, Egypt and Ghana.

Chef Dennis Ombachi is well known for his commonly used term after every end of his activities he usually says done. Fans online are congratulating him and many of them are nicknaming him 'done'. Dennis serve as an inspiration to many content creators with the same interest and also other creators with different content from cooking.

Content created and supplied by: SkyJuniorUpdates (via Opera News )