A Dying Soldier Invented Coca-Cola. This Is How It Happened.

By Bozemba (self meida writer) | 20 days 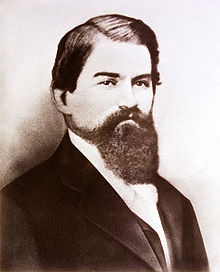 Coca-Cola is widely known as being a Symbol of America. It was created by Dr. John Pemberton, a famous physician in the 1800s. When the Civil war hit he tossed away his lab coat for a button Uniform and joined the Army. After getting caught in a direct line of fire, he was given a life-threatening drug to ease the pain for his last few hours. But he miraculously survived and used his near-death experience to build Coca-cola's $74 Billion brand.

In 1831, John was born in the small town of Knoxville and raised in Rome, Georgia. When he was 19 Years old he received his license to practice Thomsonian Medicine. It was known to use the principles of botany and herbalism to rid the body of harmful toxins. At the time it wasn't well respected and many were Suspicious of the Practice.

But that didn't stop John from opening a business that Specializes in Materia Medica, substances that were used to make medical remedies. A few year later, John pursued a more Conventional path and earned a graduate degree in Pharmacy. But not long after, he was forced to ditch his White lab Coat for a button Uniform.

The Civil war had erupted, and John was made the first lieutenant. Three years into battle, he got caught in a direct line of fire, and was slashed with a saver. His doctors didn't think he would live and give him Morphine to ease the pain for his last few hours. But he proved them wrong and miraculously survived.

From then on it was only a Matter of time until John was back on his feet. When the smoke of the Civil war cleared. John strived for a better life. He moved his family to Atlanta and became a Senior member of Pharmaceutical firm. The media called it one of the most impressive labs in the U.S., and John became known as the most famous Physician in Atlanta.

But behind closed doors, John was Struggling. After his near-death experience, he became addicted to Morphine with no cure in sight for what had became a daily habit. He looked for a Herbal remedy, at the time he heard good things about a drink called Vin Mariana.

It contained ground Coca leaves and red wine, and was said to heal any ailment. That gave John the Idea of making his own version to cure his Morphine Addiction. Using Coca leaves, red wine and Kola Nuts, he created what he Called Pembertons French Wine Coca.

Coca leaves were known to act as a Stimulant and Suppress Hunger, Thirst, Fatigue and Pain. While one leaf Contained 0.35 Percent of Cocaine, it was easy to get in the U.S. Some Doctors and Pharmacists reported that it was a possible cure for Opium and Morphine Addiction.

As for Kola Nuts they were high in caffeine and know to aid Digestion. John believed his French Wine Coca could not only cure addictions, but depression, anxiety and different ailments including Headaches. To help other war Veterans, he set up a distribution network to sell his remedy.

He would make the Syrup in his lab, and then ship it to partners and contractors who could sell it as they liked. The remedy was Instant hit and used by many, but the demand alone wasn't enough to keep the business going.

John was faced with a challenge that forced him to pivot his new Business leading to the Invention of Coca-Cola.