By Phalamkigen (self meida writer) | 1 months

There are so many chicken breeds in existence that even others have not yet been documented. The ones which are popular have stood the test of time and proven to have the desirable qualities farmers like.

We are going to see what makes the following breeds desirable and loved by farmers worldwide.

The Ancona is a tough, hardy bird that originated in the Italian part of its name, probably from Leghon stock, it has beautiful black mottled feathers that have a beetle- green sheen in the sun and end with white tips. At first the white tips may not be very prevalent, but with each moult they become more so; this gives the birds a slightly camouflaged appearance, making them suitable for free ranging where predators may be a problem. 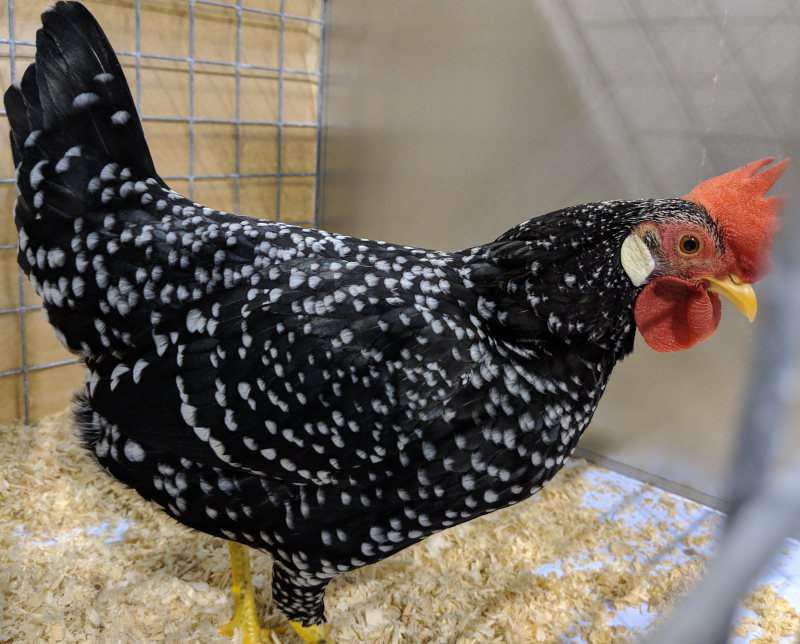 White ear lobes denote a white egg layer, and the Ancona produces a prolific number, like other Mediterranean breeds, not to go broody; it does, however, lay well through the coldest of seasons. The single comb may droop to one side after the first point on the hen though it is upright on the cockerel- rose comb varieties are also found. This is an active bird, some may say flighty, that is happiest with plenty of space; any fencing will have to be high as they are also excellent flyers.

The Andalusian was developed in Spain in the mid- 19th century. Its beautiful blue plumage with slate lacing is produced by crossing a splash (blue and white mottled) cockerel with a black hen and doesn' t breed true- i. e. , two blue birds mated together produce a mixture of colors- although it is only the blues that are eligible to be shown. 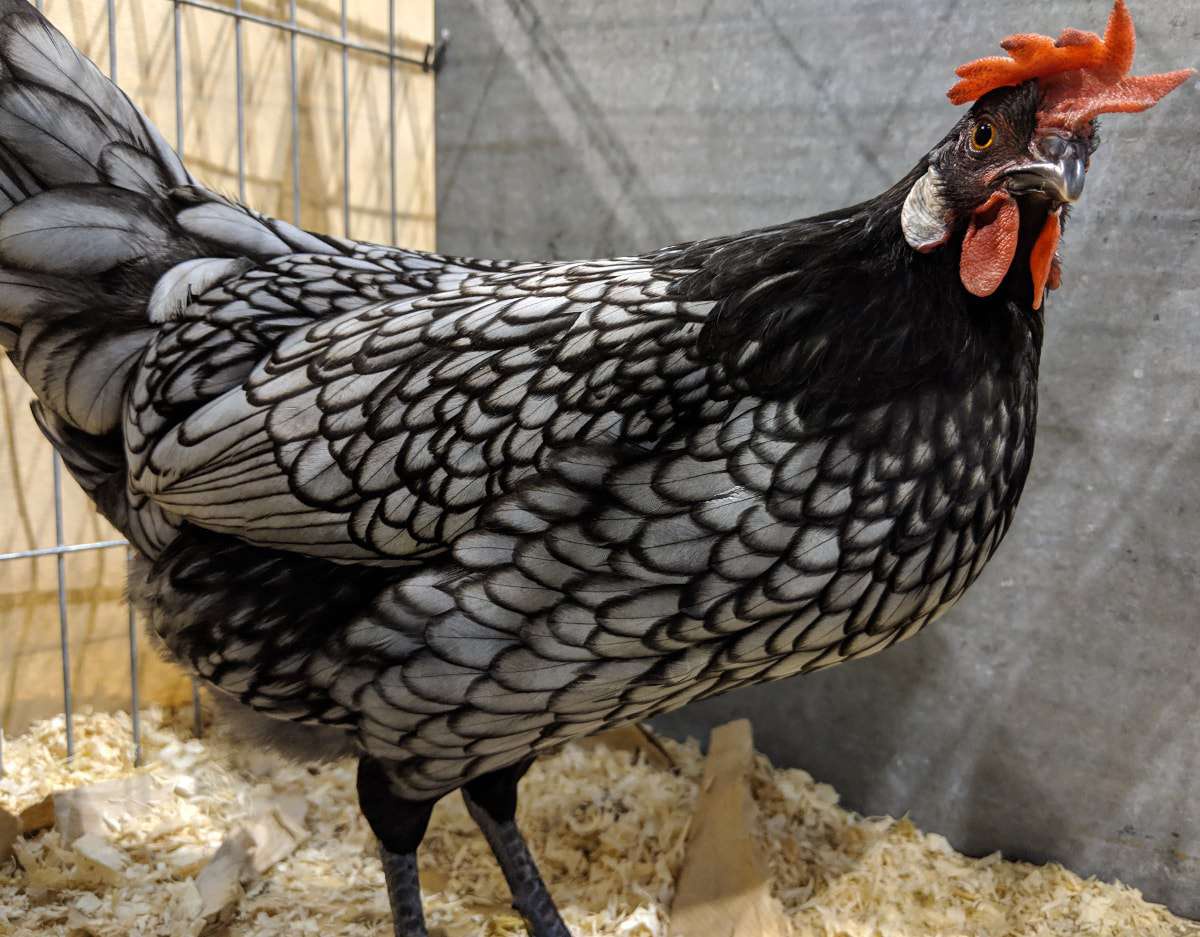 The bright red combs flop to one side after the first point and can suffer frostbite in cold climates- the bird being more suited to heat. It is an active forager that can run fast and tends to avoid human contact, which makes it difficult to tame.

This is not a beginner' s bird, not only because of its flighty character but because even if two blue birds are mated together the chances of breeding true blue offspring are small and most of the young stock will have black or white splashes in their plumage.

The Barnevelder Breed As A Reliable Layer

A reliable, handsome layer of gorgeous dark eggs. These fine layers were originally developed in Holland to lay dark brown eggs. Many breeds were used in their development, including Marans to improve egg color, which is a dark reddish brown, although the eggs tend to become lighter as the season progresses. 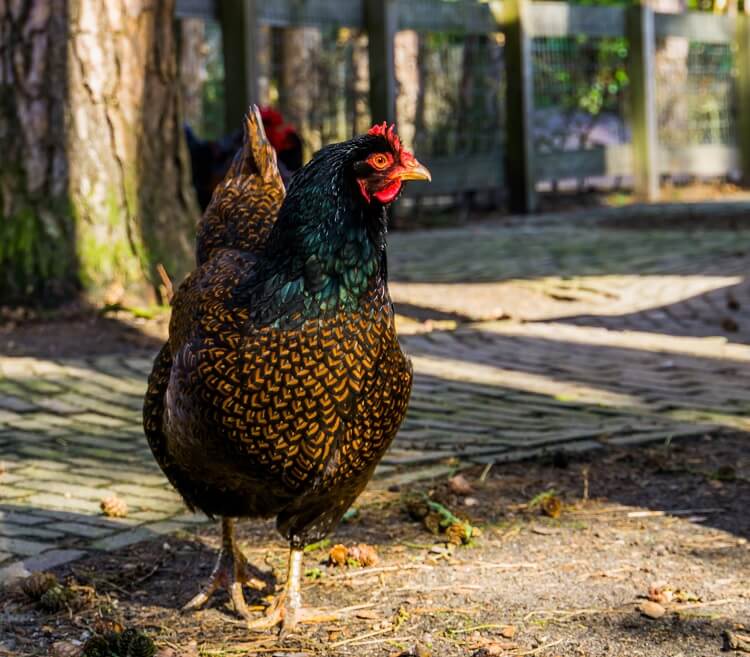 They have been found in Holland since the 12th or 13th century. Locals there claimed that their hens laid 313 eggs a year (being religious they rested on the Sabbath or it would have been 365! ).

A large, docile and friendly bird, Barnevelders are poor flyers and can be contained by even a low fence. They are known for their rather lazy disposition so would be ideal if only a small space was available- however, they can run fat, which will affect their laying performance. They are hardy and are known to endure damp weather, continuing to lay through the coldest of seasons, though it takes sunlight to show off the beauty of their greenish black lacing on bronze feathers. Other colors found are black, white or silver, but it is the laced variety that is most popular and striking. 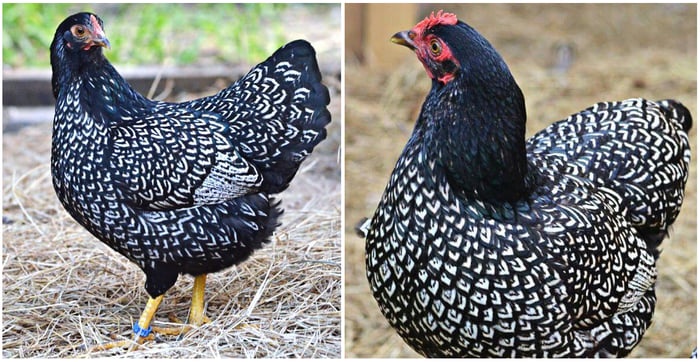 The Braekel or Simply The Brakel Breed Of Chicken

It is a proud looking bird, with black eyes and dark red comb, which flops to one side in the hen. Its striking plumage of pure white cape and black- and- white penciled body is very attractive and the commonest colouring, but it is also found with gold barring. Being a good forager it us happiest being allowed to range but will live happily in a large run. 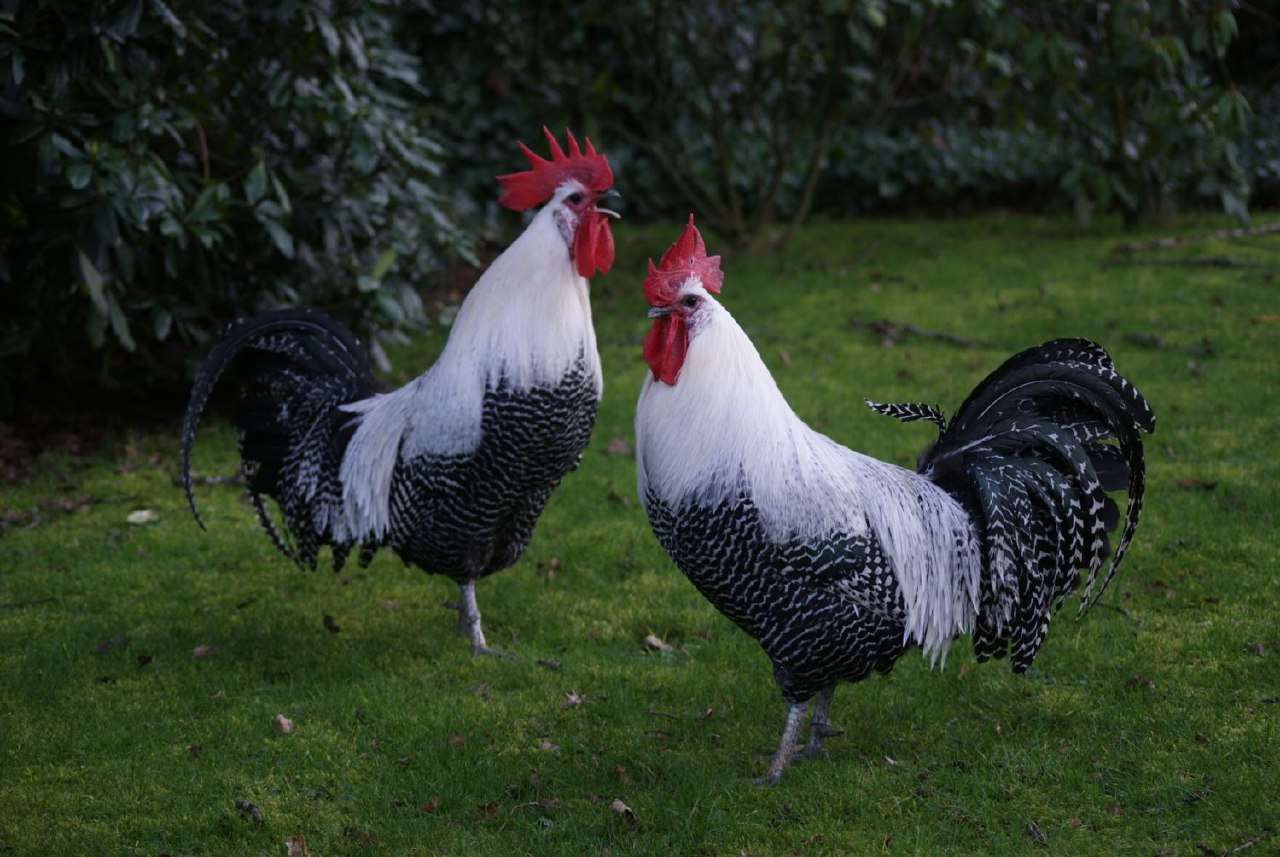 Not surprisingly they enjoy heat and although hardy are not tolerant of confinement and avoid human contact. If contained this breed will need high fencing as they are capable and determined flyers and will do their utmost to roost in a place of their own choosing rather than in the designated hen house. Their honey- colored feathers are complemented by a black- tinged tail, and their large comb with six points flops over in the hen after the first point is upright in the cockerel.

One of the largest breeds- cockerels can reach 5kg- it was the Cochin that launched interest in poultry shows, causing a sensation because of its huge size. This really is an all round bird as not only does it produce a fine carcass and lay moderately but also it' s feathers were used to stuff pillows and feather mattresses. 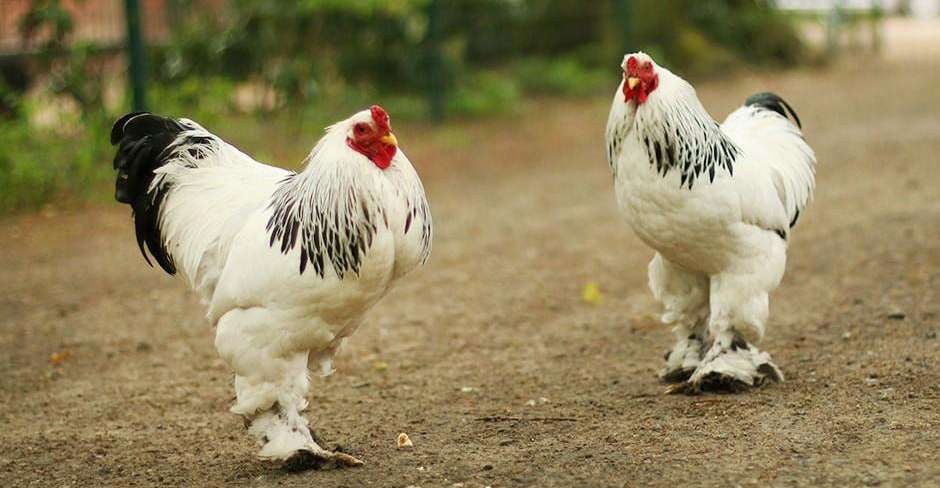 Being so large, these birds are slow to mature into very fluffy, peaceful and friendly creatures, with feathered legs and feet and pouf tails. They need little space, and because of their feathery feet tend not to scratch as much as some; however, they will need a mud- free sheltered area to retain their quality of their feathers. For a bird of such great size, they lay surprisingly small eggs. The hens make excellent mothers and frequently go broody.

Dandarawi is an ancient Egyptian breed from the city Dandera, north of Luxor. They are tough little birds that can easily look after themselves, enjoy the heat and fly well. This is not a breed that will take kindly to close confinement. They have remarkable combs, rather similar to a Sicilian Buttercup in that they are made up two single combs joined at the front and back, making sort of elongated cup with a small tassel at the back. 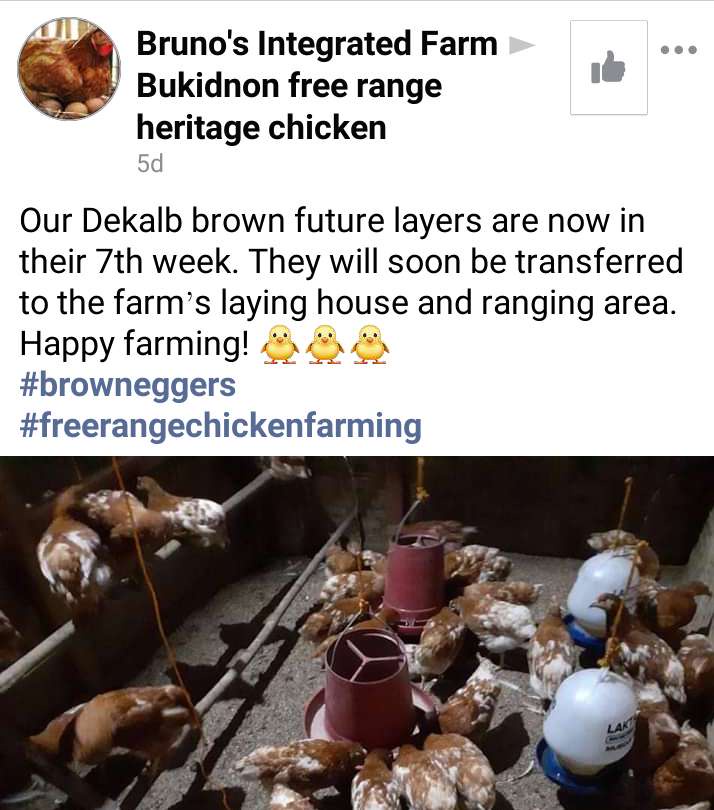 One useful attribute is that when the chicks hatch female can be distinguished by a dark spot on their heads, which the males lack.

This is an ancient Egyptian breed, known since the time of the pharaohs, and has only recently been found outside of Egypt. It is a small, hardy breed with an upright tail, which likes the heat and matures early. The cockerels begin to crow at five to six weeks old. This trait also means that the hens start laying at 16- 18 weeks rather than the average 21 weeks.

Being known for their wild streak, the birds are rather flighty but could support themselves if allowed to free range. 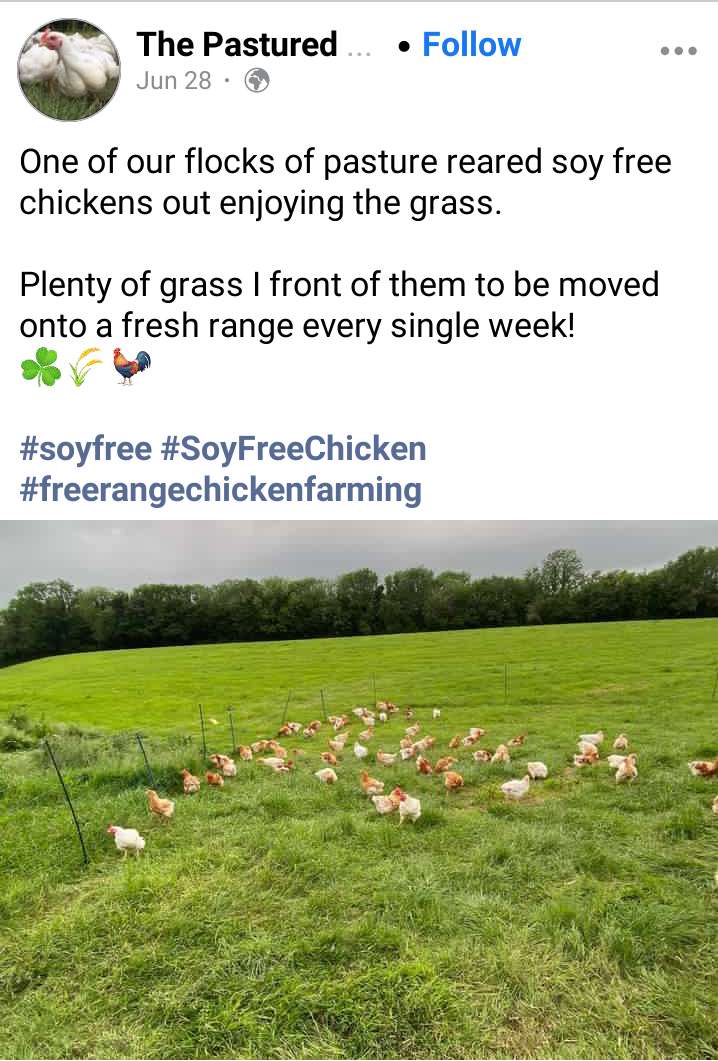 They have one other benefit- they seem to be resistant to viral diseases, possibly including avian flu, which could be a large advantage considering the possible pandemic of this disease.

The top ten fashion items that secretly damage your health

Why do some people show-off?

Men: How To Stop Urine Dripping

What Made Nakuru Doctor Kill His Two Children.

Symptoms that Could Indicate that You are Having Leukemia

5 of The Most Weird Foods in Kenya Consumed by Luo, Mijikenda and Luhya Communities