By NetizennewsKenya (self media writer) | 14 days ago

It is not always easy to recognize a fake photo especially when the photo is real but the caption is fake. Here are 7 internet photos that people believed were real.

1. What happened at the rainforest over 10 years- The picture is accompanied by a text that says every year 46000 to 58000 square miles of forest are lost to deforestation which made it look real. The is not a collage of 2 pictures as many people see it. It is Malaysia where the rainforest was removed to increase the territory for growing palm trees.

2. A guy mixing rice- In this photo, the rice is actually fake, it is simply a sculpture that you can buy in a shop where the fake foods are sold. 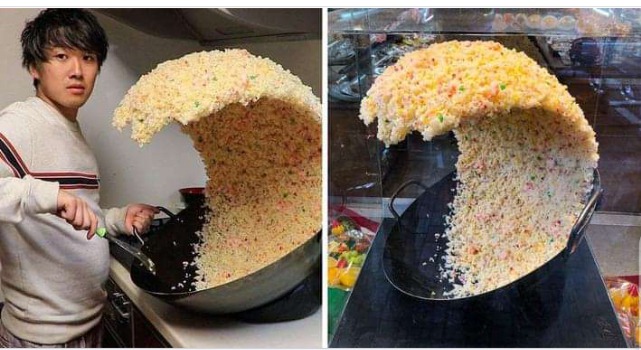 3. Graffiti you can only see in the water- This is a photo hit on many websites but the truth is that it was edited. The author of the picture drew the picture upside down for it to be reflected in the water.

4. A lynx and a dear were found in an office under a table where they were hiding from fires in California. The picture was taken in May 2009 in a building that is owned by animal rescuers. The animals had to be housed in an office because there were no cages.

5. The new year in Paris- The picture shows numerous fireworks that were landed in France but unfortunately the photo was fake.

6. A typical day in Russia- It is said that the photo shows a real white bear getting out of the tram in Russia. The photo is real but the bear is not real. It is a costume that 2 green peace activities were wearing.

7. A goose frozen to a pipe warmed a puppy with it's wing- The picture was shared on social media where a shivering goose that froze in a water pipe was warming a puppy with it's wings. The real picture is where the puppy was sitting at the side of the road freezing. Ducks were passing by and the puppy ran and was covered with a wing.