By kenya.newszjunky.co.ke (self meida writer) | 24 days 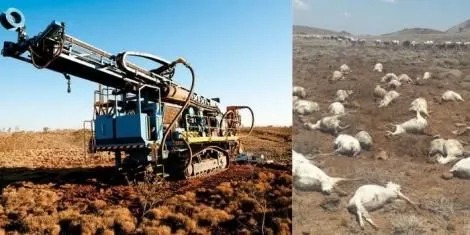 Like the Maasai, the pastoral people indigenous to the North-Eastern region can claim some bragging rights - the Borana, Burji, Samburu, Turkana, Oromo, Somali, and a mish-mash of their intermarriages.

A typical characteristic of these people is a general resilience, a hard-boiled mien - much like the camel which has traditionally defined their livelihood. A generational harsh nomadic lifestyle shapes much of this resilience.

The Northern Region doesn't offer much in terms of creature comforts most citizens take for granted in other parts of the republic.

Life is not easy - if you are not enduring bad roads, non-existent healthcare, salty water, you perpetually live on the edge under threat of invasion by gun-wielding battle-seasoned cattle-rustling bandits.

Until recently, there wasn't a single mile of tarmac, - well, All Hail, Devolution.

It's not for nothing that the government and NGO's offer attractive hardship packages in their job contracts.It's against this backdrop that questionable deals by shadowy global entities have targeted the region - and the effects are presently manifesting.

Lately, a silent cancer pandemic is sweeping across the region - to an extent the Garissa County Government has had to fund a modern cancer treatment centre at the County Referral Hospital - which serves the northern district.

This cancer centre was opened by Governor Ali Korane in February 2021 - in what he termed as an "endeavour to stem the costly travel and treatment of cancer patients in Nairobi and India".

It's hardly the publicized malnourished children or maternal deaths that's a pain, but the silent numerous deaths attributed to various forms of cancer.

The five most common types of cancer are breast, prostate, lung, colon and rectal and skin cancer - across the country.

Oesophageal cancer, however, is the most common type in North Eastern, Kenya.

Curiously, the region's most affected age groups with oesophageal cancer are 45–64 years (36%) and > 65 years (34%). Animals, too, have not been spared as cases of mysterious deaths of goats and cattle have become common.

Do you know why? It all has to do with foreign companies dumping cancer-causing waste in the region - under the guise of fictitious pursuits - mostly, oil exploration.

In 2010, the environmental organisation, Greenpeace, revealed that nearly 10 million tonnes of radioactive toxic waste from Europe was shipped to Africa between 1988 and 1994, and identified the Somalia coast as one of the key destinations.

In 2005, an Italian environmental group and a former member of a criminal organisation also revealed how dozens of ships laden with toxic waste were sunk off the Italian coast and in the Mediterranean.

They also reportedly shipped this dangerous waste to Somalia, Kenya and DR Congo to be buried on land or dumped off their coast.

In 2015, then Mandera Senator Billow Kerrow (now retired) released a sensational piece slamming the country’s premier medical research institution, Kemri, for falsifying and concealing findings of research into the tragic epidemic in Marsabit.

Kemri declined to publish the results, insisting it could only be released to its sponsor.

Later, it spoke impudently that the deaths could not be attributed to radioactive materials possibly dumped by oil exploration companies. Instead, it blamed excessive impurities in water.

Senator Kerrow in a flat-out accusation called out Kemri for covering up an open secret instead of releasing results that the region could use to agitate for community-based research that would help nip the epidemic in the bud.

Elderly folks in the villages openly tell of oil exploration companies wheeling in large trucks with containers at night under heavy guard and burying them in the ground.

While Kemri hides behind supposedly impure drinking water, it's very clear that hazardous radioactive waste was dumped in Marsabit and other parts of North Eastern in the late 70s and early 80s.

This explains the prevalence of oesophageal cancer in the 36-45 year age group.

There are verified records at UNEP, of large containers of hazardous waste - lead and mercury, being washed ashore in Somalia beaches in the 2004 Tsunami.

In 2009, Al Jazeera TV ran a confessional exclusive of former officials of an Italian maritime company telling how they'd bribe officials in Somalia in the 1990s to bury radioactive waste in heart of that country.

Thankfully, The Basel Convention was signed in 1992 by the European Union and 168 other countries - which seeks to control trans-boundary movements of hazardous wastes.

The government's chronic apathy and disinterest give leeway to international criminal firms seeking to save millions by taking shortcuts.The results? Generational deaths, miscarriages and misery for the locals.

TBT: Raila Excites Netizens With a Past Photo of Him While Young, Kenyans React

Unravelling Michael Mudavadi, Son to Musalia Mudavadi and How He Once Escaped Terror Attack