By TendetiNews (self media writer) | 1 month ago 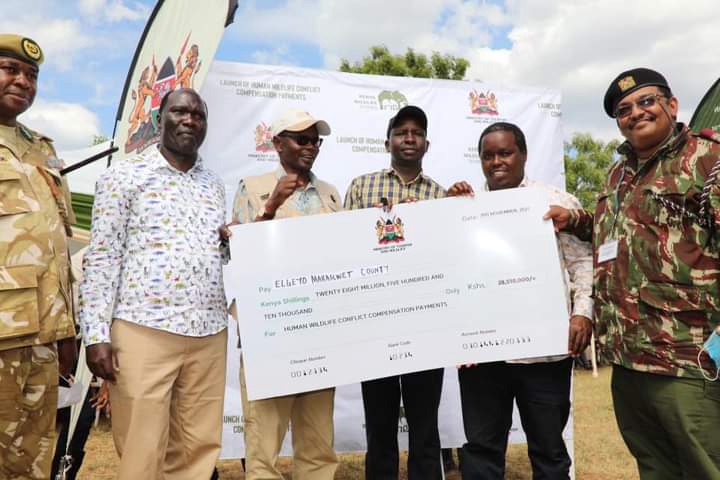 Today, the Kenya Widlife Service (KWS) in conjunction with the County Government of Elgeyo Marakwet issued compensation for victims of Human Widlife conflict.

The national government has been compensating such victims under the compesation act 2013.

The first phase of compensation was done to those who suffered injuries and to families of kin who died.

In Elgeyo Marakwet 560 claims were reported and 111 of them were cases of injuries and death. The compensation released today at the function held at Tot, Marakwet East Sub County, summed upto Ksh. 28,510,000.

Tourism CAS Joseph Boinett who presided over the function disclosed that Tot secondary school will be awarded with Ksh 3 million to help build a dining hall in courtesy of the KWS as part of it's Corporate Social Responsibility.

CAS also promised that a car will be deployed and officers increased at theTot KWS station.

"Compensation forms are issued at chiefs offices and affected residents are advised to pick the forms and fill so that the assessment is done to determine compensation," he said.

Prof Segor said the ministry shall ensure that during the KWS scout recruitment, Elgeyo Marakwet will be considered.

"Water provision mechanism for this area will also be put in place to mitigate the incidence of animals searching for water," he added.

He also promised on the crop destruction compensation will be done soon in the next phase.

"Anti-Venom to be placed at specific high profile spots to curb the cases of snake bites and poisoning," said the PS.

Speaking at the event, Governor Tolgos urged the residents to file claims on behalf of victims of wild animal attack so as to be compensation.

He thanked the national government through KWS for availing the Ksh 28 million compensation saying it would help surviving victims and families of deceased to rebuild their lives.

Content created and supplied by: TendetiNews (via Opera News )

Zora Tv Show: Zalena welcomes Nana in Her Family as She Warns Madiba Against Investigating Ogolla