Common Causes Of Goat Poisoning And How To Prevent It

By Phalam (self meida writer) | 7 days

Goats can be poisoned in many different ways but it usually occurs from the ingestion of poisonous substance. Some foods or medications that are commonly eaten or used by humans will kill goats and other ruminants. These include a wide variety of things such as avocados which contain a cardiac glycoside and imodium, used by humans for diarrhea, imodium paralyses the gut of ruminants which is usually fatal.

Overdosing when drenching for parasites, especially if the drench contains a toxic phosphate, this can be toxic to ruminants and many goats have been lost to this. Overdosing with certain dietary supplements has also caused problems. 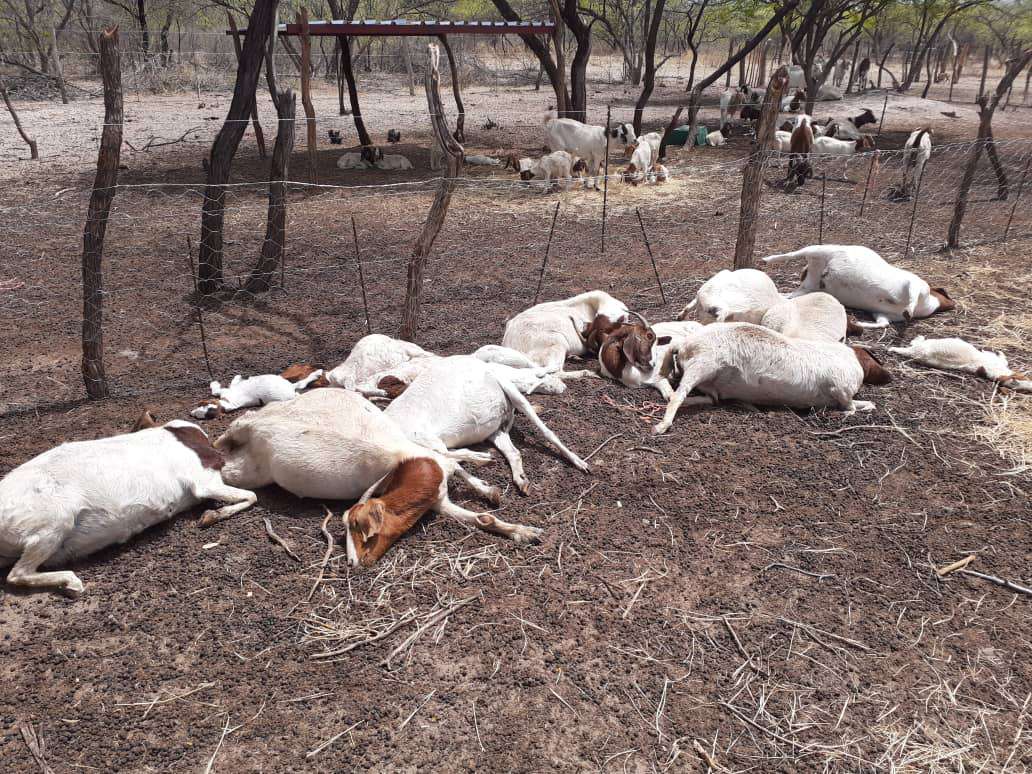 There are about 1000 plant species in Kenya known or strongly suspected to be poisonous to domestic animals and humans.

Some type of ferns cause blindness due to the thiamine they contain. Blindness from fern poisoning is a temporary condition- if affected animals are treated and recover, their sight will be normal. Blindness caused by overdosing from drenches for intestinal parasites or from the ingestion of certain plants is permanent.

Their is no treatment for blindness due to drench overdose because they destroy the optic nerve. Death might follow from eating moderate quantities of these other poisonous plants. 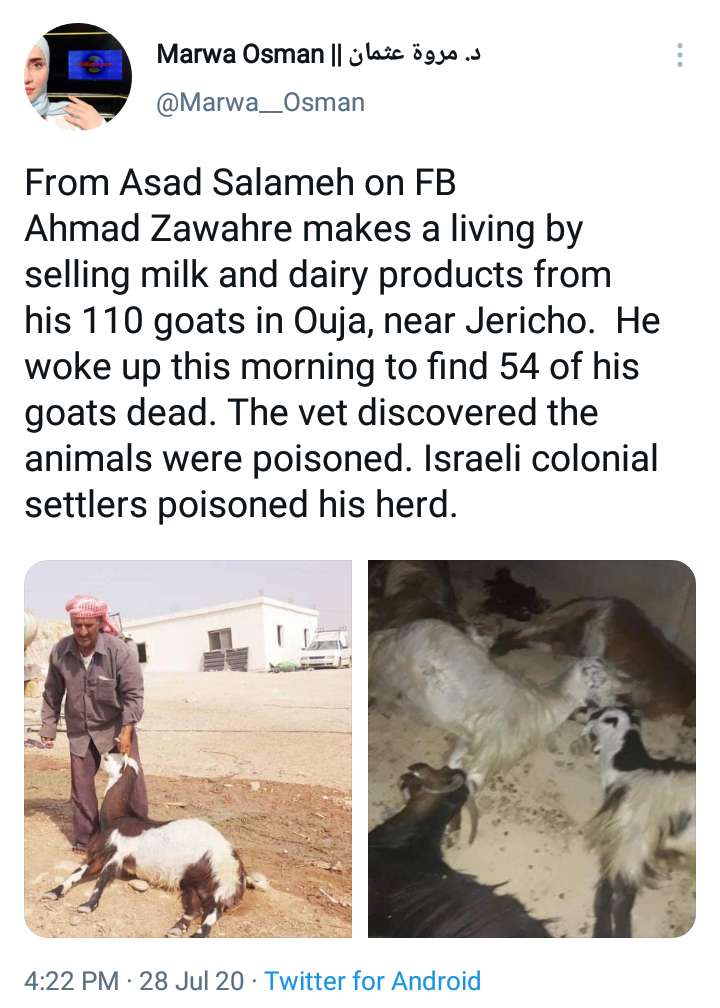 How Avocado Is Poisonous To Your Livestock

Avocado fruit, or any part of the plant, fed to livestock often causes stock losses. Lactating goats that have been poisoned by avocado will have very thick milk with a severe reduction in milk volume for several weeks.

Treatment is expensive and intense, and will need to be done by a vet who will replace fluids lost through diarrhea and give activated charcoal to absorb toxins in the gut. The vet will also give drugs to help support the heart. Despite this, the animals may still die. Prevention is the best option. 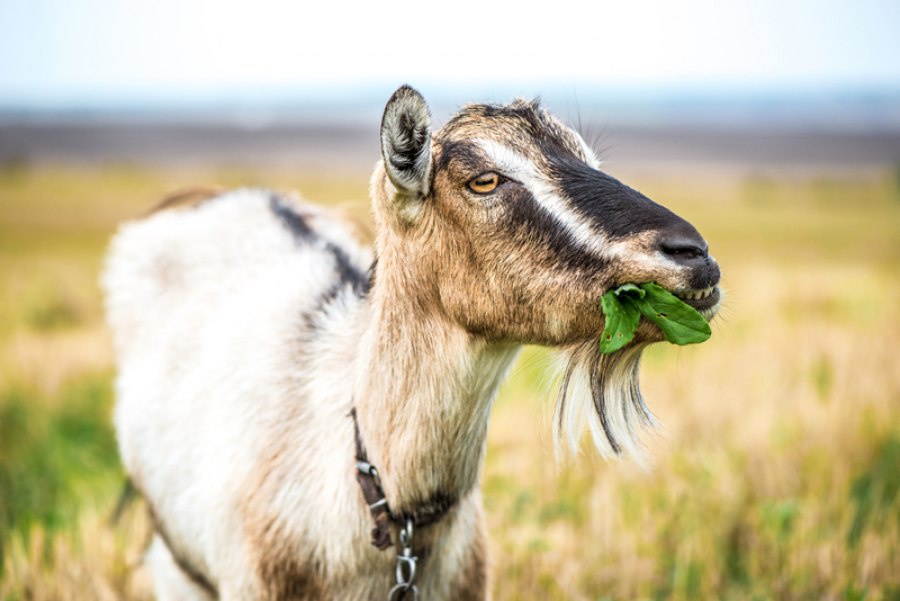 Prevention is not too difficult: most stock will eat this plants only when there is little else to eat. Seek advice from your local vet for advice on control if you have large infestations of a particular weed. Goats often become poisoned if they are accidentally given this toxin containing plants when owners feed them prunings and clippings from the garden/farm.

Fungal Toxins That May Kill Your Goat

Stock can be poisoned when grazing on feed that has fungus or mould. Many moulds and fungi produce toxins which can cause severe liver and organ damage and kill livestock, including goats. 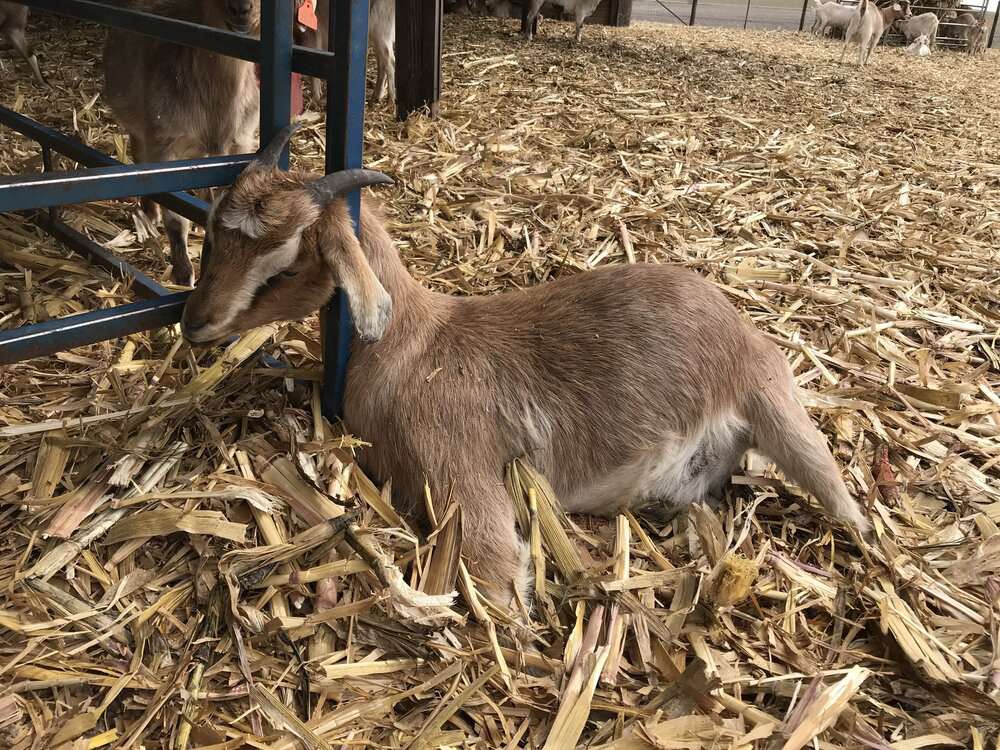 Various fungi and moulds develop when conditions are suitable for their growth. In the field, these conditions often include moisture, warmth and buildup of pasture litter. Mould or fungal toxins in grain or other concentrates may occur if moisture has entered the silo or storage bins before the feed is fed out to the goats.

Toxins may be even be present in peanut meal, cotton seed or grains when they are purchased; it is sometimes more economical in the long term to pay more for feed that you know is from a reliable source.

Prevention involves avoiding the buildup of pasture litter, by proper management of pastures. For treatment, it is suggested dosing animals with zinc salts- very carefully, as zinc itself is toxic and overdosing will damage the pancreas. 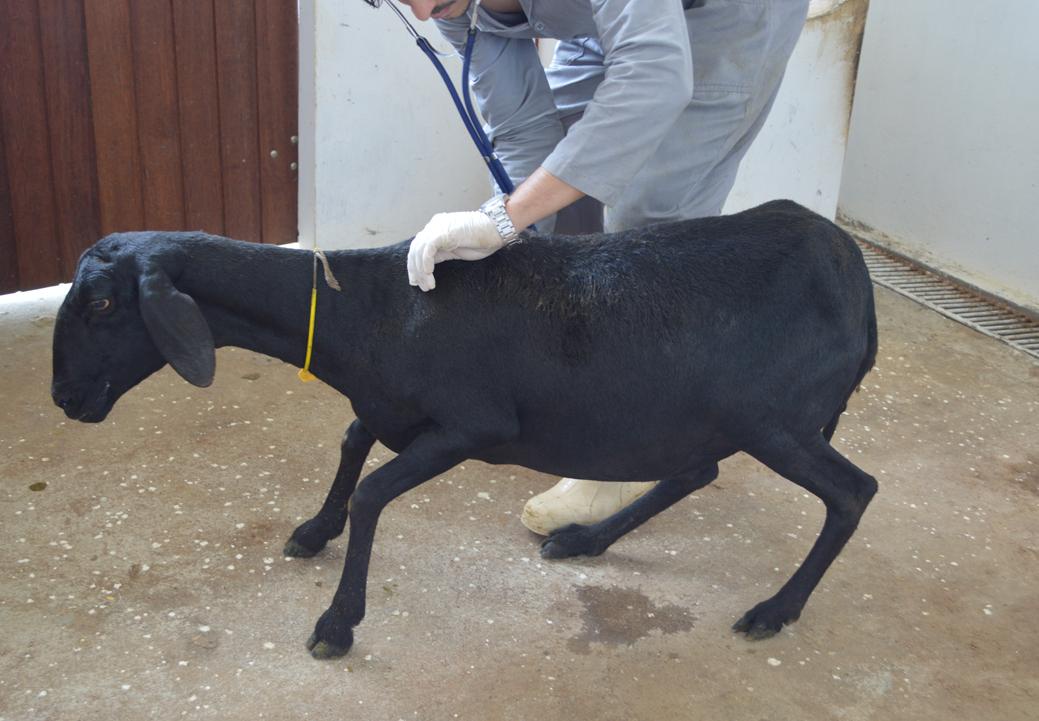 Urea poisoning is not uncommon in goats, especially where goats and cattle are run on the same property. The reason is that cattle are often fed urea as a readily available non protein source of nitrogen. Goats can be also be fed urea as a supplement but they require much less than cattle, due to their much smaller size and bodyweight.

Problems with urea poisoning arise when goats gain access to molasses intended for cattle. Goats unaccustomed to molasses often gorge on it. It is not that molasses is bad for goats but when fed to those goats which have not adapted and in large quantities then as a farmer you will be in big trouble. 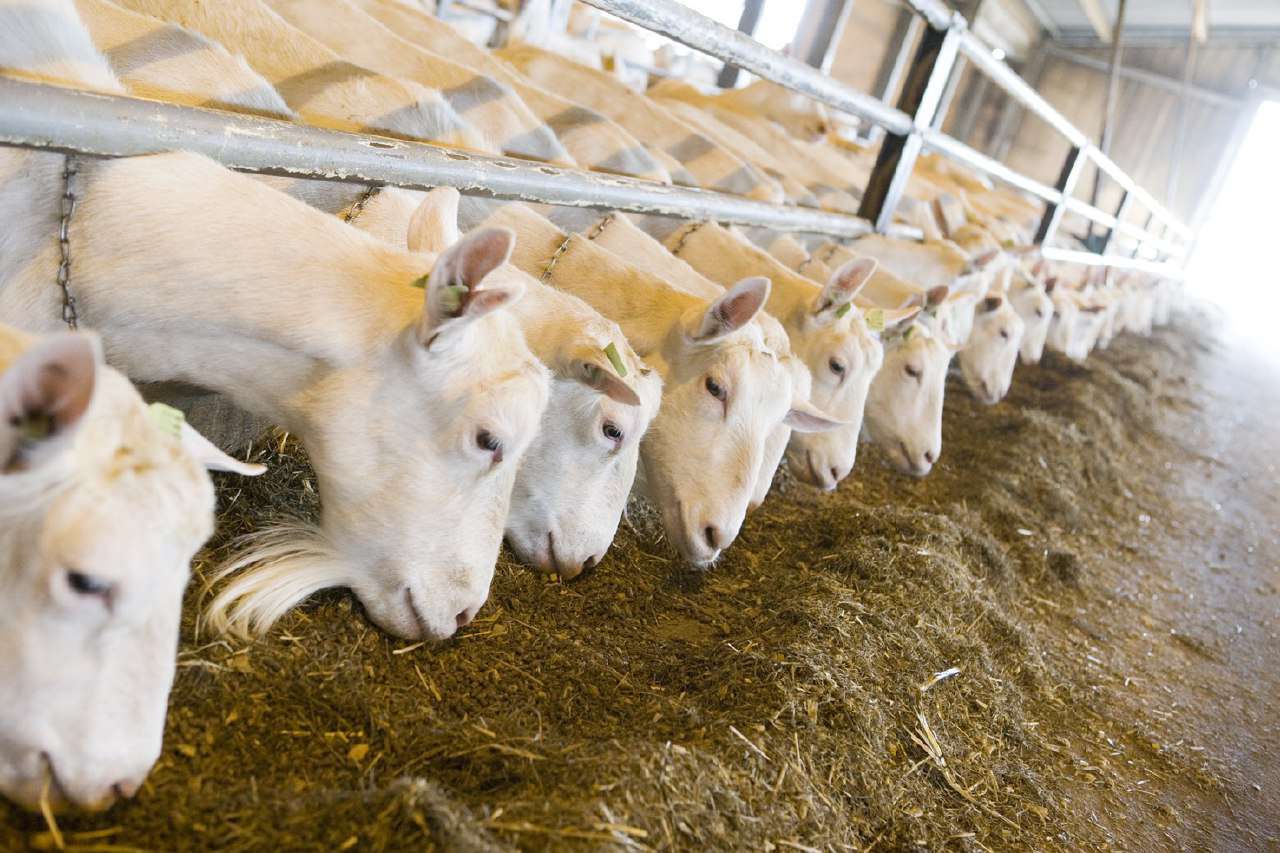 Effects of Poisoning To Humans

When animals are poisoned it is not only the animal that is affected. Humans who consume a poisoned goat are definitely going to suffer the same poisoning the animal underwent. In terms of losses this is the worst way a farmer may loss his or her investment because when poisoning occurs, it usually sweeps across the whole farm and a whole stock can be lost within hours. When goats are poisoned by feedings this is worse because no amount of treating with antibiotics can save the flock. A human life lost due to consumption of a toxic meat cannot be recovered but a new stock can be raised. This is the reason consuming dead animals in the farm is not encouraged even when the animal succumbs naturally. 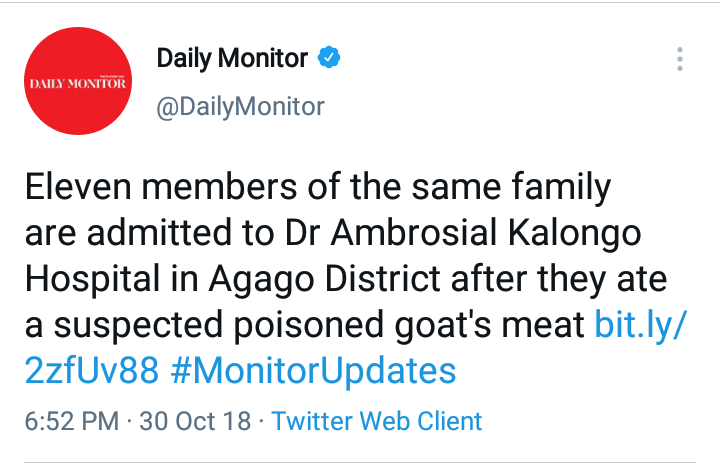 Pigweed contains oxalate which is a poison to goats, the plant grows throughout Kenya from the inland to the coast. After rain following a dry period, pigweed is often the first plants to respond and grows rapidly. Hungry stock may become fatally poisoned by the oxalate and nitrate compounds it contains.

Small amounts of oxalate can be metabolized by rumen bacteria quite safely, but if the animals eat large quantities the pigweed rumen bacteria cannot metabolize all of the oxalate and it is absorbed.

Clinical signs of this poisoning often resemble those of milk fever; muscular tremor, staggering and halting gait, lying on one side with legs extended, subnormal temperature- the ears and interior of the mouth are cold to the touch and breathing is shallow and fast.

Coma and death within may occur 12 hours of eating the plant. 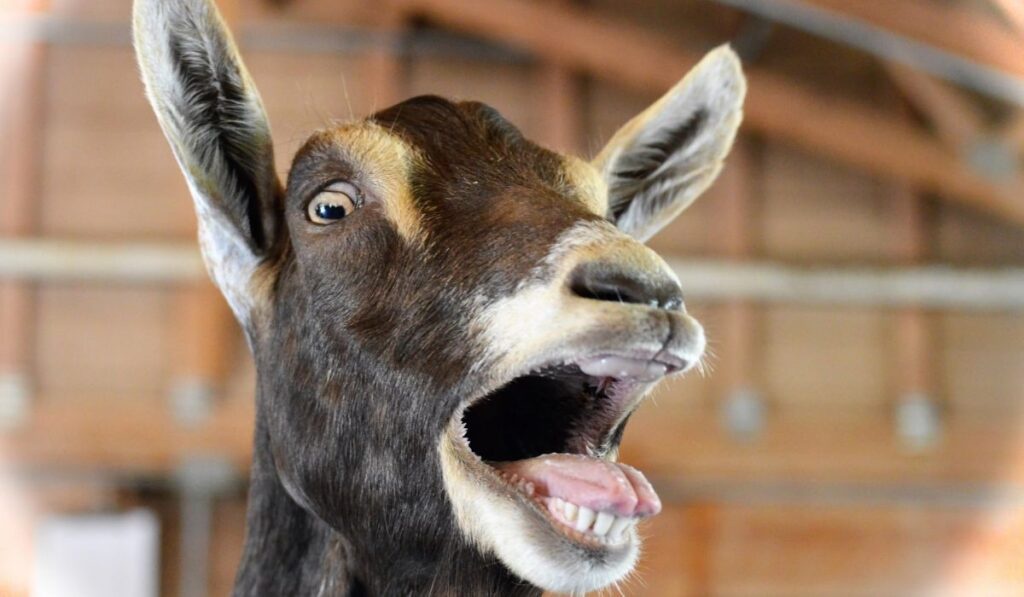 General Preventive Measures To Avoid Poisoning In The Farm

To prevent fungal poisoning, feed must be stored correctly in clean and dry conditions. When a goat is poisoned with fungi ingestion, there is no treatment. If goats have not grazed paddocks with high levels of pigweed infestation for several weeks or months, the process of adapting their rumen bacteria to the toxins will need to be done all over again. Stock should only graze for only an hour or less and be fed roughage before release.

This is not a comprehensive coverage of poisoning to animal farms and as a reader I will request you to add more of your knowledge in the comments for all to learn from. All possible treatment suggestions are welcome. 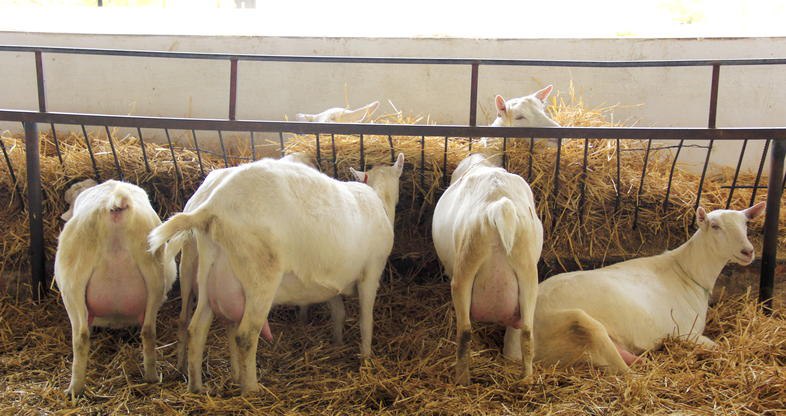 Tragedy After Boat With 16 Passengers Capsizes in Lake Victoria