Top 10 Most Beautiful Fish in the World

Top 10 Most Beautiful Fish in the World

Fish are one of the most beautiful creatures of mother nature. There are approximately 34,000 different species of fish found in the fresh and salt waters of the world. 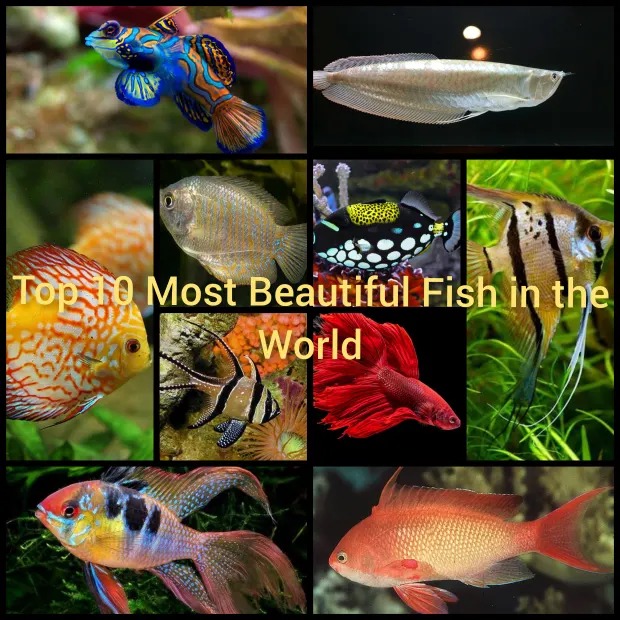 The Crowntail betta fish, earned its famous name due to its vibrant tail fin, despite only being 20 years as a species. It is a small fighting freshwater fish, that has its origin back to South Asia.

Its caudal fin has big extensions, that can be sometimes 8 inches in diameter, which is the three times the size of its body.

The crowntail betta is approximately 2.5 inches in length, but can grow to a maximum size of 3 inches. It has a lifespan of 2 to 3 years, which is typical for any small tropical freshwater fish.

They are mostly found in vibrant and attractive colors, of which most prominent are the dark shades of blue and red.

Symphysodon, a fish native to the Amazon river basin in South America, is also known as discus fish. They belong to Family Cichlidae.

Due to their unique shape, behavior, vibrant colors and patterns, discus are popular as freshwater aquarium fish, and also referred as "King of the Aquarium". Their aquaculture is a major industry in several countries of Asia.

Discus are generally calm and peaceful, but as cichlids, they can be aggressive while spawning and in attempts to pair off.

Their food mainly consists of plant material and detritus, but can also be seen foraging at the bottom looking for small worms and crustaceans.

The Banggai cardinalfish is a small marine bony fish, which is endemic to Banggai Archipelago, in Indonesia.

It has been introduced outside its natural range through the ornamental live reef trade, and is very popular in aquarium culture.

This attractive fish is mainly silver in color with tiny polka dot patterns on its fins. It also has three black bands in vertical direction.

The Banggai cardinal primarily feeds on copepods, but also eats planktonic organisms. It has an average life span of 2.5 to 3 years, and the maximum life span is up to 5 years.

The Mandarinfish is one of the most beautiful and stunning fish of the ocean. It is native to the Pacific ocean, ranging from Ryukyu Islands south to Australia.

It is a small and shy tropical fish, which is popular as a photographic subject due to its striking beauty and interesting habits

Mandarinfish is not a strong contender in finding food, as it is a fussy, careful and slow eater. It feed mainly consists on protozoans, small worms, small crustaceans such as mysids, amphipodsand isopods.

One of its prominent feature is its big outward-set eyes, which is an ideal adaptation for food hunting and feeding in the dim light underwater environment of ocean.

Freshwater angelfish is probably the most recognized fish in the aquarium hobby, which is native to tropical South America, including much of the Amazon River system.

They are mostly found in quiet, slow moving waters, in their natural habitat. In wild they are seen in dimly lit areas, under vegetation or trees fallen into the river.

The fish belong to Cichlid family, and comes in a variety of beautiful colors and patterns, ranging from colored stripes to solid silver, or black and silver marble. They can live up to ten years or even longer.

They are generally peaceful, but being cichlids, they can be aggressive while pairing up and spawning. They are opportunistic like most fish, and can eat anything that fits into their mouth, including smaller fish around them.

The Ram cichlid a small, colorful, and very popular aquarium fish, which is endemic to Orinoco River basin, in the Savannah of Columbia and Venezuela.

The fish has an oval shaped body, with pointed fins and tail. The mature males can develop more pointed dorsal fins than females.

In aquarium, males can grow about 2 inches (5 cm) larger in length than females, whereas in nature they can attain a length of about 2 3/4 inches (7 cm).

The Ram cichlid is an easy maintenance fish, and is known as the best "beginner" cichlids, due to its beautiful colors, calm and peaceful nature. They are easy eaters, and can easily eat anything fed to them.

Arowanas are freshwater bony fish, found in the rivers, lakes and ponds of Asia, South America, and Australia. They are also known as the bony tongues.

These fish have a narrow and thin body shape, which make them resemble with eels. There are about 10 different types of Arowana, 4 from Asia, 3 from South America, 2 from Australia, and 1 from Africa, that are commonly kept as pets.

Asian Arowana is listed as an endangered species, and is banned in US. In 2009, an albino arowana was sold for a record price of $300,000.

Mostly pet arowanas are farmed and raised under high security fences. They are solitary fish, which only allow company when young, adults may show aggression and dominance towards others.

Found in the western Indian Ocean, including the Red sea, and in the Pacific Ocean as far east as Japan and southeast Australia, the sea goldie is a small tropical fish that inhabits the translucent waters of lagoons and coral reefs, up to 20 metres in depth.

These fish are protogynous hermaphrodites, like the other members of their family. They are born as females, but turn into male at some point of their life.

They are organized in harem system, in which one male protects and controls several females, and that's make them aggressive and territorial.

Known as one of the most beautiful aquarium fish, dwarf gourami is native to slow flowing freshwater rivers, ponds, lakes and rice fields of Southern Asia, but can also be found in USA, Singapore, and Colombia now.

Formerly known as Colisa lalia, dwarf gouramis continue to rise in popularity. These strikingly colorful fish are low maintenance, and prefer to live and stick together when possible. In this way they feel more secure and comfortable.

They have an average life span of 5 years, but under good conditions, they can live even longer. They can grow to a length of up to 4.5 inches, but on average they only grow up to 3.5 inches in size.

The Clown triggerfish is a brightly colored fish, and can also referred as the foraging predator. They are widely spread throughout the tropical and subtropical waters of the Indian Ocean, and the western Pacific Ocean.

They can be found around the reefs in the wild waters, where the shellfish and other invertebrates are found. These are very aggressive and territorial fish.

While being very attractive and colorful, they can be the most aggressive inhabitant of an aquarium. So while selecting their tank mates, choose other large and aggressive fish. As once they reach around the size of 5 to 6 inches, they are pretty much not afraid of anything.

Thee Pluto Gifted 50K By A Nairobi Politician On His Birthday.